Last year new rupee symbol had been launched – but it was very difficult for online users to use this symbol as there was no dedicated key which was given to the Rupee symbol as it is in case of the Dollar, Euro or the Pound. They had to use a workaround for Rupee symbol to show up on the browser.

Alternatively, there was also a rupee symbol font which was released by Foradian Technologies, that made it possible to use Rupee Font in desktop documents. 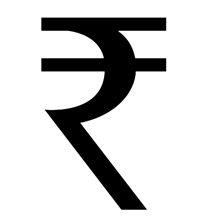 But, very soon users can simply type the Rupee symbol using normal computer keyboard. According to announcement by government today, The Indian Rupee symbol can now directly be typed on the keyboard using “Alt Gr” + “4” keys together. The new Rupee symbol has been encoded in Unicode Standard and National Standard ISCII.

Being a standard, all keyboard manufacturers will now have to include new rupee symbol on their keyboards.

Ten Technology Trends that will change the world in Ten Years!