Yes, now India is outsourcing work to different parts of the world, including US to get their work done. This trend has started since last couple of years, notably by top Indian IT companies like Infosys, TCS and Wipro.

A very recent article in New York Times has a comprehensive article on this trend. The article coins a phrase: 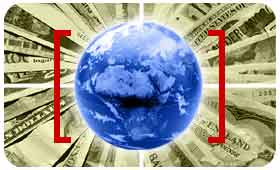 What does that mean?

In simple words, the outsourced IT work that cannot be done in India is again outsourced toÂ cheaper developing countries by Indian companies.

India has been the biggest beneficiary of outsourcing trend. Companies across the globe have been moving IT work to India in a quest to reduce cost and improve quality. However, with rising software wages and stronger Indian currency, these advantages are diminishing. Add to that, threat from countries like China, Vietnam and Mexico who are trying to emulate India’s success story in outsourcing space.

So what do Indian companies do to overcome these threats?

Outsource to countries where the work can be done at cheaper cost than India. And Indian companies are doing exactly that -Â opening offices before their clients approach these countries by themselves. The advantage Indian companies have is, theyÂ have mastered the outsourcing game over last few years. So before countries like Vietnam rise in outsourcing space, they setup shop and capture the market share.

And it is not only Vietnam or China or Morocco where they are opening up offices.Â Indian companiesÂ are opening hubs in US itself. Look at this statement from Mr. Azim Premji

In a poetic reflection of outsourcing’s new face, Wipro’s chairman, Azim Premji, told Wall Street analysts this year that he was considering hubs in Idaho and Virginia, in addition to Georgia, to take advantage of American “states which are less developed.”

By the way, ITÂ wave is now being replaced by Manufacturing wave in India!

At least thats what NY Times says, The Next Industrial Giant Is … India?

TCS Will Hire 1200 Americans At Their Illinois Campus; 3000 US Employees Already…