Lowly Institute & Australia India Institute interviewed 1233 Indian citizens between August and October of last year to find out about what are their opinions on range of subjects including their future in the world, their feeling towards neighboring countries, their priorities in life and various issues face by them in India.

The report “India Poll 2013” puts forth some interesting findings based on the interviews conducted – Here are some of the key findings:

Indians are Optimistic about their Future Even though terrorism pops its head every now and then 64 percent people feel quite safe about the environment they live in.

Infrastructure remains the key worry for Indians. Shortage of energy, water and food along with climate change are seen as most important challenges faced by India currently. 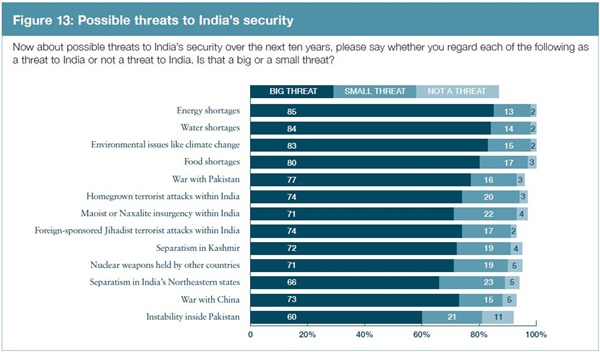 From Security point of view, 77 percent opine that “war with Pakistan” is a big possibility. Some of the other security worries include home grown terrorism, Jihadist attack, war with China and Maoist insurgency.

How Indian Feels about other countries

Pakistan remains the least liked country by Indians While United States is the most liked. In Fact, over 78 percent Indians want India to work more like United States, while 60 percent think the same about Australia, Japan and Singapore. However, 89 percent Indians believe that ordinary people in India as well as Pakistan want peace and want India Pakistan relations to improve. 76 percent also feel that India should take initiative in achieving this peace with Pakistan.

As far as China goes, the report puts across some interesting observations – Only 31 percent Indians agree that China’s rise has been good for India and 65 percent respondents feel that Indian should join other countries to limit China’s influence over the world. However, equal number of people (64 percent) also feel that India should co-operate with China to play a leading role in the world.

What Indian feel about Corruption

94 percent of Indians feel that Corruption is rampant in India (I wonder who are those 6 percent who don’t feel like that) and 92 percent feel that it has increased in past 5 years.

Majority of Indians (96 percent) Indians feel that corruption is holding back India and 80 percent are of the opinion that anti-corruption crusaders have made India a better place to live!