As expected, India has crossed a major milestone of 1 Billion Mobile subscriber base. In the month of October 2015, India added 6.83 million new mobile subscribers taking the total tally to 1003.49 million!

In comparison, whole of 2014 witnessed addition of just over 50 million subscribers. Check out the chart below that shows mobile subscriber additions since the start of the year 2014.

With this addition, active subscriber base also crossed 900 million mark, 902.26 mln to be precise.

The active subscriber percentage was also highest in October at 89.91%

If you see, the active percentage has been steadily increasing over last few months. TRAI has done well to weed out non-active subscribers from the system.

TRAI has done well to weed out inactive numbers from the system. In 2012-13, the active percentage hover between 75 to 80 percent and now it nearly touched 90 percent.

Here is a graph depicting Total vs Active mobile subscriber base in India. 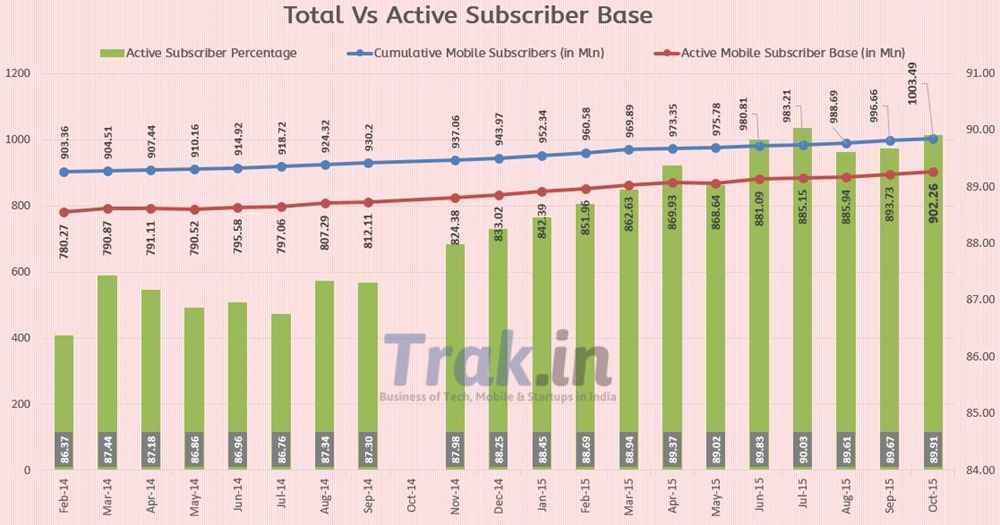 – Urban India witnessed a monthly subscription increase of 0.05 percent or 0.29 mln subscribers, while rural mobile subscriber base increased by 1.56 percent or 6.54 mln.

– 5.11 million new Mobile portability requests were made in month of Oct 2015, taking the total tally of MNP requests since launch to 181.50 mln.

– Delhi remained the circle with highest teledensity of 239.13, while Bihar has the lowest at 54.42

– Out of 125.22 million broadband users, 108.48 million access internet through mobile devices or dongles.

In month of Oct 2015, Bharti Airtel added maximum numbers with 2.767 mln new mobile subscribers coming under their fold. For, the first time, Idea Cellular was not in the top 3. Vodafone added 1.3 mln, followed by Reliance at just over 1 million.

It is for the first time this year that Reliance has managed to cross 1 million subscriber base. October was a very bad month for Tata – they lost over 1.17 mln subscribers. BSNL has a decent month consecutively – they added over 727,000  subscribers in October. Here is graph showing performance of operators over past 12 months.