It would not be too wrong to say that Reliance Jio has completely ruled the new subscriber additions since the time it launched – and numbers prove it. Reliance Jio launched their services in September, and in first 3 weeks of the launch they notched up close to 16 million subscribers.  In the month of October, they have added even more bettering their own record at 19.6 million.

According to the TRAI’s October report, a total of 28.68 new mobile connections were taken, taking the total number to 1078.42 million.

You can clearly see how new mobile connections have shot up in September and October.

Interestingly, active subscriber base grew relatively moderately at 21.3 million, which also shows that many Jio subscribers did not use their numbers, even after they had unlimited calling and free data offering. This does not look like a good sign for Jio.

In October, a total of 970.47 mln connections were active as compared to 949.17 million in the previous month.

Here is a chart comparing Active Vs Total Subscriber base growth – 4.93 million new Mobile portability requests were made in the month of Oct 2016, taking the total tally of MNP requests since launch to 239.46 mln.

– Delhi remained the circle with the highest teledensity of 236.38, while Bihar has the lowest at 56.91. The all-India teledensity currently stands at 86.25.

– Out of 218.42 million broadband users in India, 199.90 million access internet through mobile devices or dongles.

When it came to new additions, Jio bettered their own record from the previous month. Idea Cellular also had probably their best ever month adding over 6.3 million new connections. Bharti Airtel added 2.3 mln new connections followed by BSNL (1.19 Mln) and BSNL (1.18 Mln). 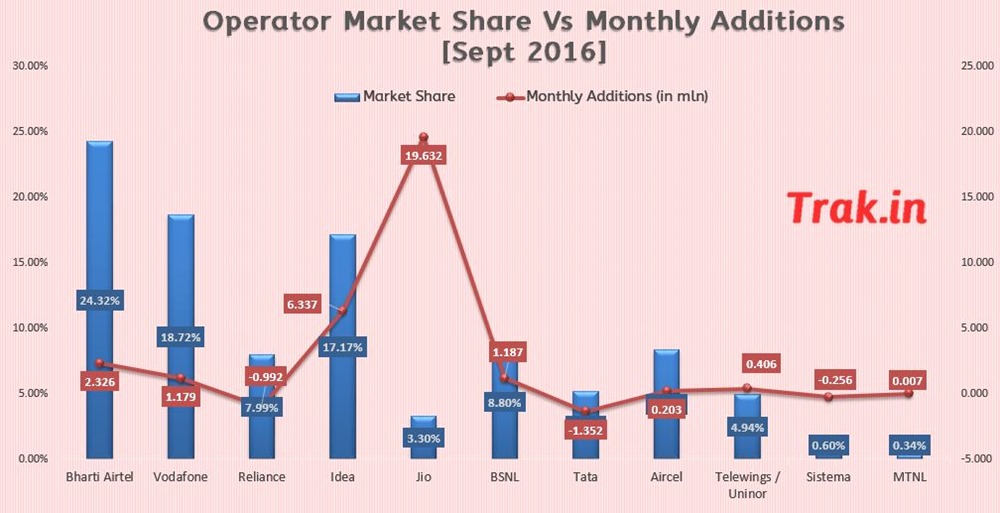 The operator that fared worst was Tata, who lost over 1.3 million connections followed by Reliance who lost close to 1 million subscribers.