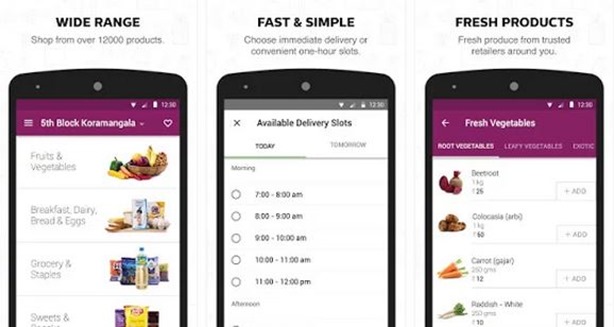 Selected localities in Bangalore would be served initially as Ola Store has partnered with leading retail chains in the city such as Namdhari’s Fresh, Family Mall, Grocery Mart, and the app is only available on Android as of now.

While ordering any product, the customer can either ask for immediate delivery or chose a time between 9 AM to 11 PM; which seems an interesting feature considering most of their target audience are office going folks, and timing is really important for the delivery. For every order above Rs 250, delivery is free; whereas Rs 30 would be charged for delivering orders below that amount. They are promising to deliver products within 60 minutes of their order. Ola Store claims to showcase more than 12,000 products across these 13 categories. We had shared in April about possibility of Ola Store getting launched. The news has been confirmed now.

Will This Diversification Help Ola?

If we talk about diversification, then Ola Café, which was launched in March this year, seems like a logical extension of their taxi aggregation service: Imagine a busy women executive returning home in a Ola cab after a lengthy meeting in the office, and ordering her favorite pizza on the go, considering that Ola Café is embedded right into the main app.

However, Ola Store is a standalone app, which targets a very niche audience and demand which faces some stiff competition from other established players.

Startups such as Grofers, Zopnow, Big basket, Localbanya and PepperTap have already created enough traction in the market; Amazon and Flipkart are already into this business, and they have reached a saturation point in some urban markets for this niche.

No doubt online retail only constitutes 2-5% of the overall retail market in India, and the market is yet unexplored as VCs have poured in Rs 750 crore into this niche since last 18 odd months; but aligning an established brand name for cabs with a grocery delivery app seems far too stretched.

In case Ola was inspired by UberEssentials, which started a similar grocery delivery service in the USA, then they are in for a rude shock: Uber had to cancel this service after just one month.

Ola has already so many issues at hand, that diversifying into an entirely new territory which is already bleeding with so many players, seems quite a risk: Ola is banned in Delhi, and High Court has asked for fresh license application; their database was hacked recently, and there has been no news about upgrading their security (Ola Store doesn’t seek customer’s confirmation regarding sharing his location, and other details); there has been recurring protests and agonized requests to correct their billing issues.

Ola Store is available at Google Playstore here. Do share your feedback and review after using this app for delivering groceries, on demand. And share what you feel about their diversification decision.

Cortana For Windows 10 Is Coming To 7 More Countries Including India With Local Customizations.

IRCTC KFC Partner For Meal Delivery on Trains; To Be Launched Across 12 Trains In New Delhi Region