Global PC market has declined in Q3 2012 as per recent reports by research and advisory firm Gartner and market research firm IDC. Both agencies revealed that worldwide PC shipments fell more than 8% in the third quarter of 2012 as compared to the same period in 2011.

Among the leaders in market share, Lenovo was the only company to register a Quarter on Quarter (QoQ) growth.

Gartner’s worldwide PC shipment estimates total up to 8.75 crore units across all vendors during July to September 2012, signaling an 8.3% drop from 9.45 crore units during the same period last year. For the first time ever, Lenovo grabbed top market share while HP lost top spot for the first time since Q3 2006. 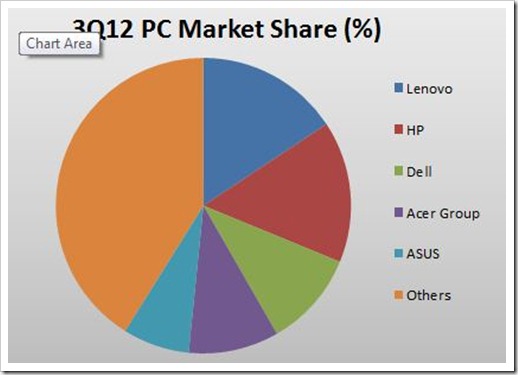 According to Gartner’s figures the gap between ASUS and Dell’s share in the global PC market has slimmed down considerably when a QoQ comparison is made. In Q3 2011 Dell’s positioning in the market in terms of quarterly shipments was 87% higher than ASUS. The same reduced to 44.4% in Q3 2012.

IDC’s recent press release also indicated a dip in worldwide PC shipments. An 8.6% overall drop was driven mainly by a 16.4%, 14% and 9.6% decline in shipments of PCs manufactured by HP, Dell and Acer respectively. Lenovo’s PC shipments increased 10.2% to 1.38 crore.

According to IDC’s Worldwide Quarterly PC Tracker, HP continued to be the top vendor in terms of quarterly shipments.

The American multinational had a 15.7% market share, marginally higher than Lenovo’s 15.7%. However with a 16.4% drop in from 1.67 crore to 1.39 crore units in Q3 2012, HP’s shrinking shipments were highlighted by IDC. The report said "Distractions caused by its reorganization, challenges in integrating its enterprise acquisitions, and an unclear strategy to regain its course remain key obstacles."

A slump in the PC market, Lenovo’s expanding footprint, HP’s declining market share and ASUS narrowing the gap with market leaders including Dell and Acer are clearly the common highlights of both reports.

From the perspective of the Indian PC market, these reports are not the first sign of Lenovo’s surging shipments. In first quarter of 2012, Lenovo grabbed top market share for the first time, edging out Dell and HP. Its push in the Indian market came as the Chinese company secured a vital deal with the Tamil Nadu government.

In a bid to connect with Indian youth, the company also got Ranbir Kapoor as its brand ambassador in May 2012. Following Q1 2012, Lenovo maintained and extended its lead as the top vendor in the second quarter.

Commentators are expecting the PC market to rejuvenate from this slump as buyers are speculated to have waited for the Windows 8 release scheduled later this month. Despite the optimism, the numbing pressure from popular and growing market segments of tablets and smartphones is also a factor that companies are looking to address.

Oppo, OnePlus Users Are Most Satisfied In India; 42% Indians Own More Than 1…

Can Honor Repeat The Xiaomi Success Story In India?

Xiaomi Beat Samsung To Become No. 1 in India; Ready To Launch MIUI 10!