For a layman, the brilliant gleam of platinum, silver and white gold is hard to differentiate apart, just by the virtue of observation. But, with the gold prices soaring sky-high, for those who prefer something other than the traditional gold for jewellery purposes, these three metals can come to your rescue for the metallic silver gleam that they provide to the settings.

Platinum vs. Silver vs. White Gold

While silver is a highly ductile and malleable metal with a white metallic luster that can take high degree of polish, it also gets tarnished when it is exposed to air or water. Among metals, pure silver has the highest thermal conductivity and lowest contact resistance of any metal.

On the other hand, white gold is a blend of pure gold and other metal alloys, which overrides the yellow tone of gold to let the silver color emerge. The difference in color between yellow and white gold is determined by the metals used in the alloy mix. Lastly, platinum is (usually) the most valuable of the three metals; and is said to be THIRTY times rarer than gold. While gold is perceived as a monetary asset, platinum is most well known as an industrial metal but still serves as economic store of value for more than a century now.

Platinum’s industrial ties and thinly-traded market makes it more susceptible to erratic moves led by recessionary slowdowns. Despite having store of value, this sharp contrast has left platinum prices to dust, when compared with the safe-haven characteristic of gold.

While an ounce of gold can be mined from three tons of ore, it is much tougher to produce platinum as it takes ten tons of ore going by the rarity of the white shiny metal. Platinum is also gaining its sheen amongst the jewellery consumers in India, due to its relatively moderate rise in prices.

Psychology towards Platinum in India

So, why is consumption demand for platinum low in India, despite the metal being rarer than gold by thirty times?

But, times have changed now, and they can buy platinum but still they aren’t too gung-ho on the prospects of the white metal. Why? Read on:

1) People follow past tradition/culture or back their forefather’s decision to buy gold during the times of crisis.

2) Platinum is similar in color to silver. Ordinary people can not differentiate between silver, platinum and white gold. That’s why, in India, white gold and platinum are not famous. People do not trust what they don’t know or are half informed about. But in case of gold, 90% of people can differentiate between gold and brass by its sheer weight and other widely known features.

3) Another explanation as to why people do not trust platinum is similar to that of evaluation dynamics in diamond. A majority of ordinary people can not differentiate diamonds from ordinary glass. There are many factors effecting diamonds like 3Cs (clarity, color, cut). It takes professionals to tell the difference. That’s why though people from ancient times knew diamonds are more valuable, they never bought them in times of crisis.

4) Platinum is usually perceived as an expensive and premium metal. But, during marriage occasions, even rich parents do not buy platinum jewellary, despite the metal having the characteristics of status symbol and considerate snob value.

5) The fact that platinum is on par with gold now itself is proof that people are buying gold in these times of crisis, and not platinum.

Today, gold prices are trading at a premium to platinum as macro insecurities have driven safe-haven investments in the yellow shiny metal. Further, if precious metal analysts are to be believed gold is likely to continue its momentum and outpace its cousin as fears over the global economic outlook keeps investors on edge. 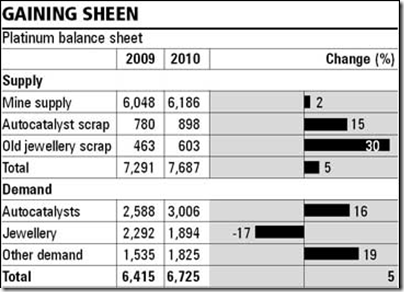 The Gold-to-Platinum ratio – which measures how many gold ounces are needed to buy an ounce of platinum – has been sliding sharply from 1.24:1 at the start of the year to 0.98:1, now. Platinum is used as a catalyst in factories and automobiles (catalytic converters in cars) apart from its usage in electric, chemical and petroleum industries.

Some market pundits believe that emergence of China as global power hub has been a major savior for the industrial demand of platinum, amidst weakened economies of the West. On the supply side, the car manufacturing industry in Japan is trying to catch up with production more rapidly after earthquake this year, even as the US auto demand remains tepid knocked by dip in consumer demand.

Looking at the way the gold prices have surged sky-high, now outpacing platinum prices, the shine of the white metallic luster seems to be losing its allure. Whether or not gold is in bubble zone is a separate matter of debate; but many wise men have rated platinum prices as under-valued, with the prospects of third round of quantitative easing (QE3) looming large on the horizon.

Further, the CPM group has released a long-term outlook for the platinum group metals to reach, and retain, historical highs for the next decade on the back of robust investment demand from the automotive industries especially from China and supply concerns on account of wage increases and shortage of skilled labor in South Africa, a major source of raw platinum ore.

According to Platinum 2011, the platinum market in 2010 showed a very small surplus of just 20,000 ounces. Global supplies of the white gleam rose by just 35000 ounces in 2010 to 6.06m ounces; and the industrial demand for the metal jumped 48pc to 1.69m ounces. The growth of new consumer-driven technologies and applications such as LED backlit TVs is expected to result in accelerated demand for the platinum group metals.

So, is it time for Platinum to make a come back in front of the Gold?

How Technology has changed what we carry in our backpacks! [Infographic]