According to the latest report released by Telecom Regulatory Authority of India (TRAI), India has 538.38 million Urban Subscribers while 267.74 million Rural subscribers. The mobile growth in rural areas is higher at 3.07% as compared to urban which was about 2.06% in January. The share of Urban Subscriber
has declined to 66.79% from 67% where as share of Rural Subscribers has increased from 33% to 33.21%. With this,  the overall Tele-density in India reaches 67.67 percent. 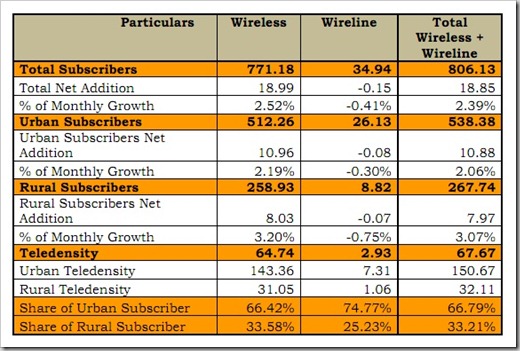 Interestingly, according to the new VLR data released by TRAI, out of total 771.18 Million mobile subscribers, 548.66 Million were active subscribers. So roughly about 71 percent of all the connections sold are being actively used. It is also interesting to note that Bharti Airtel has maximum active subscribers (92.63%) closely followed by Idea (90.34%). When it comes to region, Mumbai has lowest proportion of active subscribers (59.59%), while Jammu & Kashmir has the maximum (81.26%)!

I was also looking forward to see the churn in between telecom providers due to onset of Mobile Number Portability. It seems from the report that instead of actually being beneficial to smaller providers, it is exactly the opposite. They have lost more subscribers to their larger counter-parts than other way around. Infact, Videocon and HFCL are actually showing negative growth! Bharti maintained the lead adding 17.38 percent of all subscribers followed by Reliance (16.95) Vodafone (16.37) & Idea (13.22%). None of the newer Operators are able to make the mark with all of them put together adding less than 5% of all subscribers. Bharti leads the pack with over one-fifth of Indian Telecom market under its fold, followed by closely placed Reliance (16.71%) and Vodafone (16.52%).

Broadband growth remains subdued – In the month of Jan total of 0.29 million broadband subscribers were added taking the total kitty to 11.21 million, thus showing a growth rate of 2.70%.