But, things are surely getting better with Aviation Industry registering close to 50% growth year on year as well as month on month. According to latest report released by Aviation ministry, there has been a sustained growth in both the capacity and demand which continued even in the month of January, 2011.

Indigo and Kingfisher remained the top performers in the Industry on back of good and timely services. Kingfisher currently holds 19.5% percent Indian market share closely followed by Indigo Airlines which has 19.2% market share. Although, the Jet Airways and Jet Lite combined market share is higher at 24.8 percent ! Indigo scored very well in this area as well which registered lowest cancellation ratio of just 0.5 percent. Spicejet (0.9%) and Jet Airways (1.3%) also witnessed quite less cancellations. On other hand, JetLite was by far the worst performer with 3.5 percent flight cancellations! 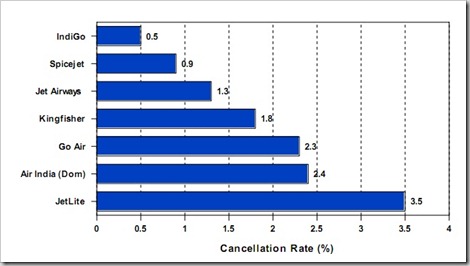 Now this one is a surprise – Air India performed better than all other carriers registering least passenger complaints with only 1.2 in 10,000  passengers complaining about various services . Go Air was the worst performer with just over 5 passengers in 10k complaining about their services. Out of the total complaints, 29 percent of all were for lost baggage, while 5.9 percent were refund related issues!

Isn’t it surprising that passengers flying on Air India complain the least !