I am amazed at the way Indian real estate market is rising. It has many similarities to the Indian stock market but minus the volatility.

I had earlier mentioned how it has proved me wrong. Since then, I have stopped making any predictions on Indian real estate market. Although, US has shown clear signs of things slowing down in last year or so, India is carrying on with same breakneck pace that it picked up sometime at the start of the decade.

Although rate of growth in metros is slowed down a bit (as the rates have reached such astronomical levels that even higher middle class Indians are finding it tough to buy), all other cities and smaller towns are growing at around 50% year on year. In some places like Pune and Mysore, it is touching 100%.

The growth is even more surprising considering the fact that home loan interest rates shot up by nearly 25% compared to 2005. This rate increase did not deter the rising home prices even a bit. 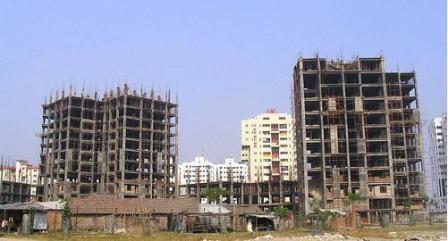 What are the reasons for such multifold rise? and how long is this run going to continue?

Here is my perspective on things.

This off-course is the biggest reason of all. Indian consumers are making more money than ever before. The demand from growing Indian middle class is so high that there is a huge gap between demand and supply. The supply is just not able to keep up with the demand, thereby increasing the rates. As of last month there is a shortage of 25 million residential homes in India!

Multinationals setting up shop in India

India forms an important part of growth strategy for every major multinational worldwide. The potential of growth in Indian market is huge. The entry of multinationals in India has grown by over 300% in last 2 years alone. Due to this, demand for office space has increased multifold. Not only does this add to the demand, these multinationals are adding more lucrative high paying jobs which again has a spiraling effect. With higher incomes, Indian people are investing more in real estate than ever before.

With Indian Government opening up Indian real estate to Foreign Direct Investment in 2005, lot of money is being invested in various projects across the country catering to the demand.

Not only has Indian Government liberalized the FDI norms, it has also allowed private equity funds to enter the real estate market. They have also introduced the SEZ act and allocated nearly Rs. 50,000 crores for improvement of Indian infrastructure fueling the real estate growth.

With Indian economy looking better than ever before, Investors are confidently pumping money in Indian property market.

With higher disposable incomes, and concept of nuclear families becoming a norm, Indians are looking for quality lifestyle, thereby increasing the demand for integrated townships that offer commercial, retail, residential, and leisure facilities within a given area.

Looking at all the macro reasons stated above, I doubt that this Indian real estate market will slowdown anytime in near future.

I would love to hear reader’s reactions and what they think about where Indian real estate market is heading.

Buy movie tickets, make payment and even select your seats – All through mobile!

Delhi Declares Pollution Emergency; North Indians Will Lose 7 Years Of Life Due To…

Youtube Is Triggering Massive Change In Online Buying Habits Of Indians: 80% Of Ad…