Drivers are feeling the pinch as incentives are being drastically reduced

During the initial stage of run, online cab aggregators like OLA and Uber offered huge incentives to pull in more drivers into their network. But moving from a break-even model, cab aggregators lately have started to focus on profitability.

In spite of multiple driver strikes this year, OLA and Uber seem to have stayed focused on the profitability factor. They have started by reducing driver incentives, and in the future the fares may see a sharp increase too. The driver incentives of the online cab aggregators like Uber and Ola have seen a sharp decline from first quarter in 2017 to second quarter in 2017. 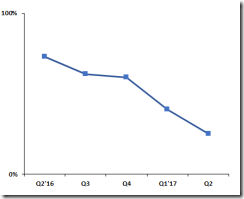 The drop in driver incentives has become one of the major reason why several drivers are leaving online taxi hailing app cab services like Uber and OLA. The supply of drivers continues to be a big worry for OLA and Uber. The number in Q2 2017 has declined to around 3 lakh from around 5 lakh drivers in Q4 2016.

There have been multiple revisions in incentives, commission rates and the working hours with no stability in the number of bookings. The first quarter of 2017 saw a 5% decline in bookings for the first time. It bounced back with a growth of 15% in terms of the ride count in the second quarter of 2017. With the recent strikes and driver agitations, it is still a long way to go before the online cab bookings hit a stability mark.

Driver income has declined by 45% quarter on quarter (QoQ) due to a sharp reduction in the incentives. The incentives were so high at one point, that Uber had advertised that they were offering drivers around Rs. 1 lakh a month. Now as the companies are looking to make profits, they have cut down a major portion of the incentives, which has resulted in strikes several times over the past few months in Delhi-NCR, Bengaluru and Mumbai.

There has been a drop in the supply of cabs, as drivers continue to leave after their demands were not met. The supply of cabs in Q2 2017 has declined to around 3 lakh from around 5 lakh drivers in Q4 2016.

The demand for shared rides on Uber and OLA has seen a considerable growth, as the online cab aggregators are pushing more for shared mobility. Cheaper rates of car-pooling services have contributed majorly to the growth, and at the same time has helped drivers to improve their ride efficiency with more riders per trip. There has been a 22% growth in shared ride count this quarter, in comparison to the previous quarter.

Xafecopy Trojan Will Steal Money From Your Mobile, Warns Kaspersky!

Affordable Internet, AI & 5G: This Is The Vision Of New Telecom Policy For India!

Uber Will Stop Tracking Riders; Offers Free Insurance To All Drivers In India