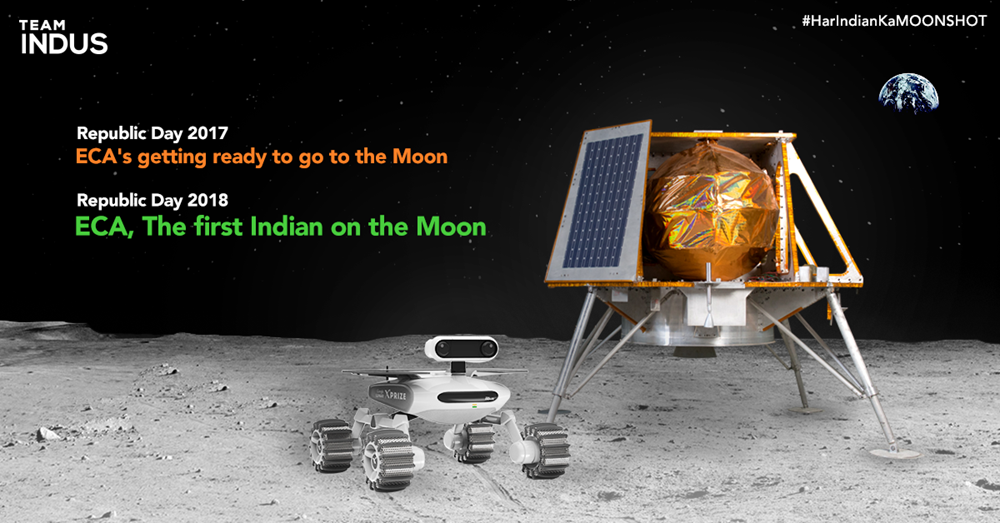 It shall certainly be one big moment for India and Indian Space industry.

Team Indus, which was India’s first and only startup to have received $1 million from Google Lunar XPrize last year for landing their spacecraft on Moon, is now all set to create a unique history.

By next Republic Day, that is on January 26, 2018, they would land their first spacecraft on the moon, travel at least 500 meters on the Moon’s surface and sent back images and videos.

This is indeed a proud moment for India, as Team Indus is one among 5 teams selected globally by Google Lunar XPrize to accomplish this feat. There were 16 teams who were competing for this feat.

Team Indus made this announcement on their Facebook page:

As per their comments, it seems that the spacecraft would be launched on December 28th, 2017 on a PSLV-XL, in association with ISRO as they have inked a commercial contract with them. The launch would take place at Satish Dhawan Space Centre in Sriharikota.

The other 4 teams which have been selected by Google, who will launch their own spacecraft to land on Moon before December 31st, 2017 are:

Chanda Gonzales-Mowrer, senior director, Google Lunar XPRIZE said, “Each of these teams has pushed the boundaries to demonstrate that you don’t have to be a government superpower to send a mission to the Moon while inspiring audiences to pursue the fields of science, technology, engineering, and mathematics.”

Team Indus is an aerospace startup, comprising of 100+ members which are supported by ex-engineers and scientists from ISRO.

Ramnath Babu, co-founder and head of operations at Team Indus said, “We are a group of ordinary folks with no experience in developing aerospace technologies; neither do we have deep pockets, which are prerequisites to an interplanetary mission,”

Ratan Tata has supported Team Indus in the past to expand their base and reach.