We are certainly living in the most exciting era of technological progress and connectivity. At a time when 2.8 billion people are online (39%) and 5.2 billion people are on mobile (73%), the world has become a giant, globally connected village where all the information ever created is just a click away. Comparably, in 1995, only 0.6% of the population was online and only 1% of the population had access to a mobile.

Kleiner Perkins Caufield & Byers, a Venture Capital fund located in the USA has come out with their annual Internet trends report compiled by Mary Meeker; and as per them, this is just the beginning. We have barely scratched the surface here!

Besides the consumer niche, where eCommerce portals and apps have penetrated deep into the global markets, there exists business niche, education market, security and safety niche, healthcare and Govt. policies and regulation where Internet and Mobile hasn’t been able to make much dent.

And as per the report, it is India which is going to be the catalyst of exponential growth and adaption in the coming years. In some sectors, India has overtaken China, Brazil and African countries when it comes to adaption and penetration of mobile and Internet; and as per the trends, India is now considered as one of the hottest market for the next wave of revolution.

We showed a glimpse of the Internet trends as derived from this exhaustive report yesterday. Here are some more India specific data and trends: 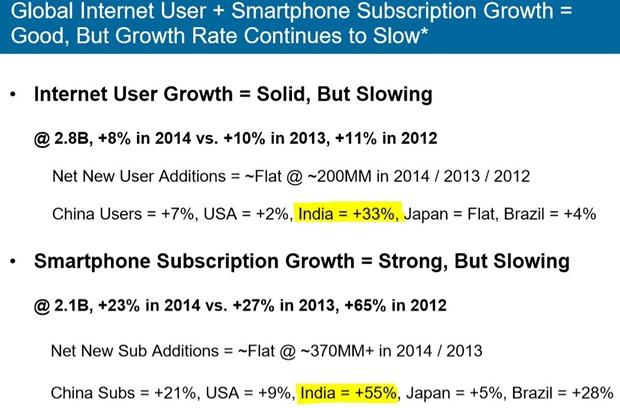 – 65% of all Internet traffic in India arrives from a mobile device; which makes us the most mobilized country in the whole world after Nigeria! – As of now, only 15% of India’s population has access to smart phones. The report estimates that this 85% non-smartphone group is most probably using a feature phone, and their entry would be made via Messaging apps such as WhatsApp or Facebook Messenger.

– 41% of all eCommerce sales in India is coming from a mobile device, which makes us the most mobilized country for eCommerce in the whole world. Surprisingly, only 15% of eCommerce traffic in USA is originating from mobile.

– India’s share in the global GDP is now increasing, and very soon we will be competing against China and USA for world domination. At a time when the hold of USA and Europe is declining, India and China are poised to have more influence and more power. And the same would be reflected in the usage and business of technology as well. The report makes one thing crystal clear: It is the developing countries which will be responsible for taking the technology and mobile revolution even further; and India will be one of the most influential catalysts for the same.

You can see the entire report here.

"India’s Mobile & Internet Revolution - This Is Just The Beginning!", 5 out of 5 based on 1 ratings.
IndiaInternetmobile
0
Share FacebookTwitterWhatsAppLinkedinReddItEmailTelegramPrint