Indian Migrants Top Global Remittances Chart Yet Again, Send $70B Back Home In 2014 World Bank has shared their latest report on global remittances, and yet again Indians have topped the charts. NRIs sent $70.4 billion to India in 2014, which is 12% of global remittances which stood at $583 billion.

As per the report, global remittances grew only 0.9% last year, as Russian economy failed to take off, economic growth in Europe was dismal and Euro lost it’s value significantly in the last few months. However, a stronger dollar and improving US economy meant that migrants were able to save a lot, and send significant amount of money back home.

There will be a slight increase of 0.4% in global remittances, as it is projected to reach $586 billion in 2015; whereas remittances to developing countries will increase marginally to 0.9% and will reach $440 billion.

However, for years after that, World Bank is quite bullish in their estimation, as they have projected a steep growth of 4.1% in 2016, which will make global remittances to $610 billion; $636 billion in 2017.

Major highlights from the report: 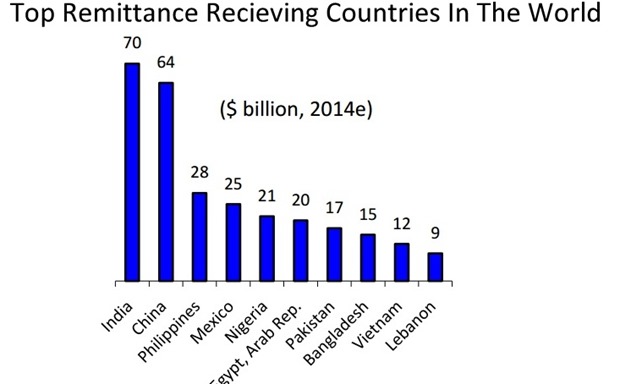 – India topped the chart with $70.4 billion received; followed by China at $64 billion ; Philippines at $28 billion

– There will be 250 million migrants by the end of 2015. There are close to 25 million Indian migrants as of now, spread across 200 countries.

– In terms of ratio between remittances received and country’s GDP, Tonga and Samoa topped the chart. In Tonga, remittance accounted for 24% of their GDP, meanwhile in Samoa, its 20%.

– Due to Russia-Ukraine conflict, remittances from Russia to Ukraine dropped by massive 27%; Uzbekistan by 16 percent, Armenia 11 percent and Tajikistan 8 percent.

– The flow of migrants from Bangladesh to India was reported as highest in the world, overtaking Ukraine to Russia migration, which was #1 last year.

– Although the volume of remittances received in India increased, its value decreased 0.6% compared to 2013, due to stronger dollar and cheaper oil

Another interesting fact: Remittances transferred using mobiles was only 2% of the total volume; thereby indicating that migrants are still hesitating to use apps. Several startups such as Amazon backed Remitly has entered this niche, hoping for increase in mobile usage.

Here is the complete remittances report published by World Bank for 2014.

Opera Mini 8.0 Update Released For Android, User Base Expected to Double by 2017!