When iPad from Apple first arrived on the scene few years back, tablets were looked upon with awe. Anyone carrying a tablet for meeting was always got a second look. However, things have changed over time. The initial awe about this large screen devices has faded to large extent.

According to report by International Data Corporation (IDC), Indian tablet market reported the strongest year to date growth in 3Q2014, thanks to festive buying and increased commercial demands for tablets.

Indian Tablet market witnessed a strong quarter on quarter growth of 10 percent, taking the size of the market to 0.94 million units.

According to Kiran Kumar, Research Manager at IDC India, “Due to continuous onslaught from the “Phablets” (which IDC defines as 5.5 inches -6.99 inches screen size smartphones), small screen tablets are taking a hit and there is more uptake on tablets which are screen sized between 8-9 inches. This has however led to an overall improvement of the average selling price for the category,”

Samsung continued to be the Tablet market leader in India accounting for 22.2 percent market share and has seen steady growth. Micromax, unlike in the smartphone segment, where they are doing extremely well and challenging Samsung at the top, in tablet market they have actually lost market share as compared to previous quarter and now account for online 10.6%. They witnessed a decline of 15% in Q3 as compared to Q2 of 2014. 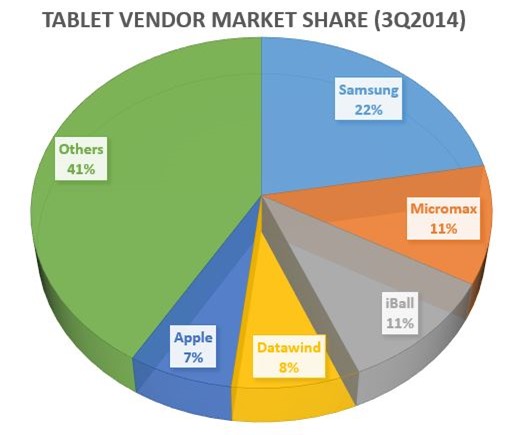 While Micromax did not fare too well, other Indian tablet vendor, iBall manager to increase their market share quite dramatically. With 10.6% market share they are now third largest tablet brand in India. With their iBall Andi line of tablet they seemed to have gained good acceptance with Indians.

Apple was fifth largest tablet brand in India with a market share of 6.7 percent. While their numbers have grown, Android tablet brands have grown much faster.

Interestingly, exactly two years back, Micromax was the largest tablet brand in India and Apple came in at third position after Samsung with a market share of 12.3%.

In our view, tablets will remain to have limited demand due to rise in phablet and large screen phones. With these devices offering users bigger screens like tablet, as well all the features of a phone, they are getting far more traction than tablet themselves. This can be attested from the fact that in previous 2 quarters, tablets actually witnessed negative growth!