3G Data Plans Comparison 2015: Idea Vs Vodafone Vs Airtel vs Reliance Vs Tata Docomo Vs Aircel

With the demand of 3G plans from the smartphone users, the telecom operators give exciting discount offers for many. If you have already read our 2012, 2013 and 2014 comparison plans of 3G packs, you would be surprised to know the telecom operator offering the cheapest offer in 2015.

If you are really excited to know the best 3G data plan for this year, you can have a look at the comparison table at the end of the post.

At the end of the post, we have also shown a table comparing the most popular 1GB 3G data plan for each provider.

The 3G packs haven’t changed much as compared to the last year. There is a difference of just 2 or 3 rupees in the smaller 3G packs. Here is the list of 3G packs if you are planning to use the internet just for few days or a week. And if you are looking forward to use the Idea internet for more than a week or even for 3 months, you must have a glimpse at the below-given table. 1GB 3G pack remains the same as compared to the last year which is 249/- Check it more about the unlimited packs and other 3G offers right here!

Vodafone 3G plan of 1GB is just 2 rupees costlier than the Idea. The cost for 1GB 3G plan for Vodafone is 251. There is no major change seen in this year’s Vodafone 3G plans.

One-day 3G plan rate was increased from 14 to 26 and the data was reduced from 50MB to just 25MB. This was a real hike by Vodafone under the category of daily plans. The 5GB 3G pack costs you 1252 which is valid for 56 days. If you want to know more about the Vodafone 3G and 2G packs, you can check them here!

Airtel is one of the trusted networks and used by many people. And the reason is the network spread all over the country. All the telecom operators mostly have changed the validity to 28 days, but Airtel didn’t change it. The validity for the 3G packs is still 30 days as similar to the last year. Reliance is slowly falling down in terms of number of users in most of the states. The Indian telecom operator offers various data packs at cheap rates to give users more data at cheap prices. However, recently they have introduced CDMA based Pro 3 EVDO Rev b plans that offer much better internet speeds and are available at extremely low rates. Have a look at this chart. 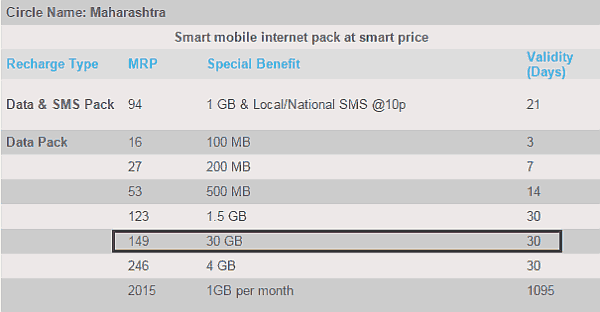 However, please note, these Reliance plans are CDMA based and not GSM, so it cannot be compared to other GSM plans that we have listed down.

For GSM, their rates vastly differ from state to state, but on an average their 3G plans cost around Rs. 150 for 1GB for 30days (you can check out the data plans from Reliance from 2014 below)

Tata Docomo has slowly increased the user base by its cheap offers. Especially, in Gujarat, the offers are very cheap for 3G packs, somewhere around Rs. 150 for 1GB. The rates might vary in different states. But here is the screenshot which will give you a clear idea about the 3G data packs of Tata Docomo.

In fact if any thing Tata Docomo 3G Data Pack rates have only gone up compared to last year.

It seems like the BSNL is trying to give the best out of the 3G packs for its customers all over the country. The telecom operator gives 1GB data pack at 3 different prices with respect to the change in validity days. Have a look at the data packs offered by the company. Aircel, which is mostly used by the people in South India, has some exciting offers for its regular customers. Right from its 3 day plan which gives 100MB of data at just 17 and 90 days plan which gives 4GB of 3G data at 699, each and every data pack gives you something extra when you recharge your prepaid number. As there aren’t many using MTNL in India, the rates are always going to be low to attract more customers. MTNL with charges of just 175/- for 1GB data pack which is most probably cheapest of all the telecom operators. Here is the full list of various offers from MTNL: Your search for the best 3G data pack ends here. We have analysed various rates of the telecom operators all over the India to make sure that you get the cheapest of all. Here is the comparison for 1GB 3G data pack. From the above image, it is quite clear that Aircel, BSNL and MTNL provides the cheapest 3G data pack for 1GB. But their network and infrastructure may not be at par with Airtel, Idea and Vodafone and their 3G speeds are generally lower and that’s the reason why they offer such cheap offers.

The Below Comparison is from 2014 kept for historical reference

[Post Updated with BSNL & MTNL plans at the end ; they were not published earlier.]

If you have been following us over past few years, you would know that we have been covering 3G data plans, since 2012 when 3G actually started in most part of the countries. Here is our previous coverage for 2012 and 2013.

As rates have tumbled down further, we take a quick look at the 3G data plan rates as they stand today.

The charges after free usage are a nominal 2p/10kb. For the ones who never get tired surfing, there are unlimited packs too ranging from Rs 651 till Rs 1501, with the Fair Usage Policy (read: speed of 80Kbps) kicking in after 3 GB and 11 GB respectively.

There is also a special rate cutter available for Rs 56 with a rate of 1p/10kb, valid for 30 days. We were amongst the first to inform you about Vodafone’s Diwali bonanza. Going by the rates they are offering, the bonanza still continues.

However, their most popular pack remains at 1 GB is at Rs 251. The best of the lot (from price perspective) seems to be Reliance.

In spite of increasing rates recently, they are still quite cheaper than others. From Rs 123 for 400 MB to Rs 492 for 3 GB, the prices are considerably lesser than others.

The most popular plan of 1 GB is also priced at just Rs 156, nearly 100 Rs cheaper than its counterparts!

Also, the data charges beyond free usage are also 0.3p/10kb, way lesser than the 2p/10kb others offer. (If you feel you don’t bother about a paisa or two, try multiplying it by a couple of thousands when you download large apps and see the difference in the amount). Just like Docomo, Aircel 3G is not available in all the cities. However, Aircel 3G rates are as competitively priced. From Rs 7 for a one day pack of 25 MB to a 997 unlimited monthly pack of 10 GB, Aircel has offers suiting everyone’s pockets. We had not previously included BSNL, but a lot of readers asked us to include, so here we go. BSNL 3G and 2G data plans have same pricing and quite cheap at that.

Their pre-paid plans start from Rs. 17 for 100mb free usage with a validity of 3 days. The have range of plans from 100mb all the way upto 20GB which costs Rs. 1949 and have a validity of 60 days. The overage charges also cost just 2p/10kb, which are the lowest.

There is no doubt that purely from pricing perspective their plans are the best of the lot. Even their coverage is quite good, especially in the interiors and hinterland of India.

Before going into MTNL plans, you will need to keep in mind that MTNL is available only in Mumbai and Delhi. Interestingly MTNL has slightly different plans than other providers. The comparison of 3G rates throws out an interesting trend. The bigger and larger providers who operate Pan-India and have larger subscriber base actually have higher 3G rates. On the other hand, the smaller ones (except Reliance), charge nearly half of what the bigger ones charge. If you go to compare on price factor alone, obviously Tata Docomo and Aircel come out the winners. However, one has to keep in mind that unlike Airtel, Idea, Reliance and Vodafone, they do not coverage in many cities.

Would love to know your thoughts on this comparison – Do let us know in comments.

MoboMarket, the All-In-One Tool to Manage Your Smartphone from PC [Review]