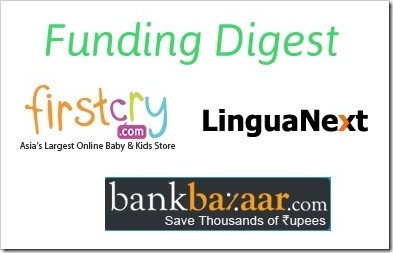 BankBazaar.com had raised $6 million Series A investment in 2011. Prior to that they had also got $1 million from Chennai based AVT Infotech in 2008.

The funds raised will be utilized to increase their category offerings to home, car, personal, education loans and credit card products.

BankBazaar.com was founded in 2008, and offers aggregation and comparison of various offerings by financial institutions like customized insurance and home loan quotes.

The raised funds will be utilized to fuel its international growth and strengthen their mobile offerings. As a part of the deal, Alok Goyal, Partner, Helion Ventures, will join the board of the company.

LinguaNext currently has 70 large enterprise customers which include 25 of the Global 2000, and a deployment base of over 1,000,000 end users. The company plans to focus deeper on US and Japanese markets along with increasing their growth in India.

FirstCry was founded by Supam Maheshwari and Amitava Saha in 2010. They have previously raised two rounds of VC funding totaling $18 million from SAIF Partners and IDG Ventures.

According to their site, FirstCry has over 70,000 baby and kid products across 400 brands and over 5 lakh customers have ordered from their site.