The “India Digital Future in Focus 2013” report by ComScore released today sheds lot of light on how Indians use internet on the PCs. As we mentioned in our previous article, India is now the third largest country for internet usage and she is expected to keep the growth rate for a foreseeable future, as internet penetration is still very low.

With close to 80 million users accessing internet from their PCs and even more accessing it from their mobile phones, what is it that they exactly do? Here are some of the insights from the ComScore report:

Social Networking is by far the most popular category, with 86 percent of Indian online population on it. And, Facebook is more or less the de-facto social networking site that they visit with nearly 57 million visitors

Facebook’s dominance is so huge that an average user spends a whooping 217 minutes on Facebook, while the average time spent on 2nd most popular SM platform, Linkedin, is only 18.7 minutes. Linked clocked 11.1 mln users compared to twitter, which roughly has 3.9 million Indians on it. Interestingly, Twitter is has lost nearly 15 percent of India’s social networking market share and on the other hand, Linked has seen 58 percent growth rate. Orkut has all but vanished from India’s Social networking scene. However, new entrants like Pinterest and Tumbler are showing triple digit growth rate.

According to Comscore report, 54 million users watched online videos from their Home or work PCs and growth of 27 percent over last year. 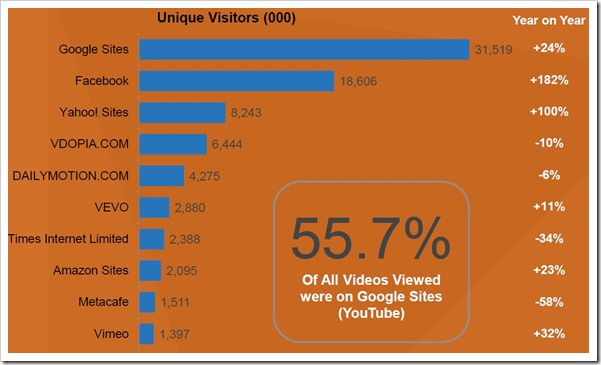 Among the Indian content producers and Youtube partners, T-Series music was the most popular with close to 9.5 million users followed by SonyBMG at 7.3 mln.