Though Google might have lost some plot against the buzzing social networking sites such as Facebook and Twitter, the search-engine major has topped the ranking for being a household brand name across the world, with a value of $44.3 billion.

In fact, Google is way ahead of fast-emerging Facebook brand, which is at 281st spot on the global ranking of most valuable brands’ report by Brand Finance. To put things in perspective, the micro-blogging site Twitter does not even find its mention in the list of top 500 global brands. The international brand consultancy has ranked Google as the top-most brand in the world, having repeatedly undertaken ventures that are comparatively un-commercial but have a positive impact on its brand rating. In doing so, the search-engine giant has toppled America’s retail giant Wal-Mart from the numero-uno position in 2010.

So, while the brand image of Wal-Mart has slipped from top position in 2010 to 3rd position this year, it’s Microsoft that has seen substantial resurgence in its brand value at $42.8 billion, next only to Google. Perhaps, it has more to do with the successful launch of Microsoft’s new operating system – Windows 7.

Not surprisingly, Vodafone has topped the honors of being the world’s most valuable mobile telecom brand with presence in over 40 markets. While Vodafone takes up the valuable 5th position, IBM manages to remain grounded on its last year’s ranking of 4th spot.

Now coming to Indian brands! Frankly, only the Tata Group has managed to pull off the plug by finding itself in the list of world’s most valuable 50 brands, notching a value of $15 billion. In fact, Tatas have done more good than any harm to its image. The Indian conglomerate has progressed from 65th rank in previous year to 50th position in 2011. 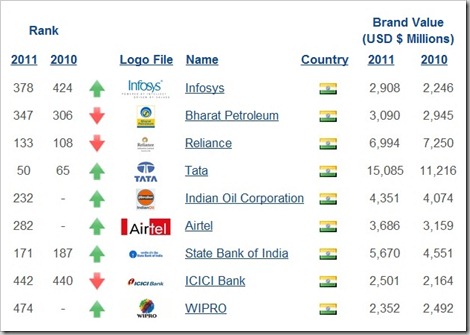 This improved brand value could be attributed to emergence of Tata’s image on the global podium since the launch of the world’s cheapest car – the Nano. In fact, it could also be due to the fact that Tata’s have acquired many global companies over the last decade in its quench to go for the fast-paced inorganic growth.

It was a good opportunity for the brand Reliance to score for India by making up in the top 100 list of valuable global brands. However, it was degeneration of brand value for Reliance from 108th ranking in 2010 to 133rd position now.

From the above list, Indian Oil Corporation, Airtel and Wipro didn’t even feature in the list during the previous edition of this report – so, gradually, more and more Indian brands are gaining traction globally.

How soon do you feel can more of Indian companies storm in Top 100 list of global brands?

Social Media Posting Is A Fundamental Right; Govt Can’t Stop You From Posting…