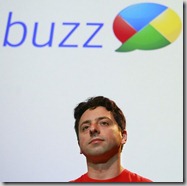 Since its launch I have been trying to figure out ‘Buzz’. That may be because of my own ‘free’ marketing needs, but even after reading multiple Tech Crunch reviews and Mashable techniques I found it difficult to connect all of this gyan from an Indian business perspective. I’ll try to put up my thoughts on the service and will seek Trak’s readers’ insight to get answers to some of the basic questions which I’m yet to resolve.

So first things first- what I think of ‘Buzz’? I would say it’s a shameless rip-off of popular features of both Twitter and Facebook. Google took what they thought worked for Twitter and mixed them with popular social features of Facebook. But in doing all this it’s the platform of launch which became a thing of hot discussion. Integrating Social networking with one of it’s most popular services- Gmail, gave Google some real good advantages to start of with. One of the stigmas with Twitter for (not so net savvy) Indians was ‘how to make good number of followers?’. We mostly use Twitter to follow (already) famous people like @iamsrk (Shahrukh Khan) or @priyankachopra (Priyanka Chopra) or @ShashiTharoor (Shashi Tharoor). But what about Businesses? It seems like even very popular business profiles on Twitter have just 2-3k followers.

This proves that Indians are on internet social networking for fun and not to get much of business related information.

Buzz got this right because the day we started of with Buzz we had some 40-50 followers (with no junk unlike Twitter), moreover searching for people is really very easy in Buzz. Somehow I never found Twitter’s Profile search working for me any time. Buzz got at least some things right in comparison to Twitter, but Twitter is way ahead with it’s innumerable 3rd party applications (which are yet to support Buzz). Second thing which Buzz did was to copy popular “Wall” feature of Facebook. One place to integrate Videos, Pics, Links etc and options to “Like/Unlike” or “Comment” on any Buzz. The way Google shamelessly copied all the features word-by-word is definitely unlike Google, which is known for its unique and effective services.

But then one or two good reasons are not tempting enough to switch to Buzz and use it regularly from a business perspective. The main problem with Buzz is its platform. The integration of mail and social media is not uncommon as both in.com and Yahoo does it, but Gmail is known for its exclusive mail services and interesting Labs features (I wonder why Google didn’t introduce Buzz in Labs first to test it out? Was it overconfidence or sense of urgency?).

When I’m using Gmail, 80% of the time I’m reading my mails and 20% of the time I’m chatting. For any business the number of emails are more than enough to not allow them to switch from “Inbox” tab to “Buzz” tab frequently. That’s a usability issue I guess.

But the biggest drawback with Buzz is- It’s not EASY to create a separate Business Profile. Google has made us so lazy in using its Account services that it really becomes a BIG task to create a separate Google Profile which can be used to Buzz. I simply want to Buzz using my business profile and I don’t need a Gmail/Orkut/Reader account for same! Can you see the complications here? I would have loved to see Buzz getting integrated with Orkut rather than Gmail. Google wants to win the ‘World war’ in social networking, but I would like them to concentrate on markets like India and Brazil. Orkut has started losing its share to Facebook here and a Buzz integration could have given us a better option to use Orkut professionally and effectively.

The other BIG question I’m asking here is- Suppose I started following 5 lac people, then my Buzz would be filled with thousands of Buzzes every second (with Videos, images etc). Will it fill up my Gmail account space ;)? Any idea?

My final Verdict- Why Facebook works? Because its very simple to create a Business Fan Page and integrate it with your original account and with Twitter (I don’t use Facebook’s Mail service much, and that should answer the question). Buzz lacks the effective ‘social’ soul! It’s actually a trade-off and in this modern era of effective social networking, we need killer products and not trade-offs.

What’s your take on this? And also let us know your answers to the questions I have asked above? Let’s figure out how small businesses in India can use Buzz more effectively.