Now this is a bummer…Here is a letter from Satyam Head Mr. Ramalinga Raju to its Board of Directors. 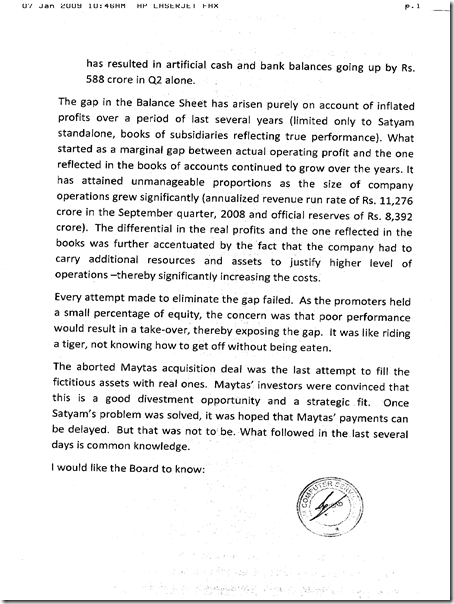 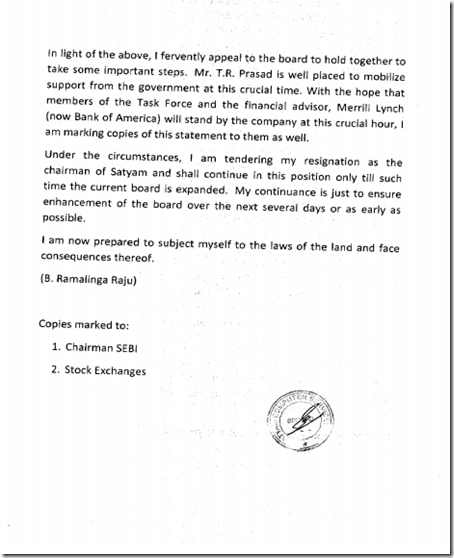 To the Board of Directors
Satyam Computer Services Ltd. Dear Board Members, It is with deep regret, at tremendous burden that I am carrying on my conscience, that I would like to bring the following facts to your notice:

The gap in the Balance Sheet has arisen purely on account of inflated profits over a period of last several years (limited only to Satyam standalone, books of subsidiaries reflecting true performance). What started as a marginal gap between actual operating profit and the one reflected in the books of accounts continued to grow over the years. It has attained unmanageable proportions as the size of company operations grew significantly (annualized revenue run rate of Rs. 11,276 crore in the September quarter, 2008 and official reserves of Rs. 8,392 crore). The differential in the real profits and the one reflected in the books was further accentuated by the fact that the company had to carry additional resources and assets to justify higher level of operations — thereby significantly increasing the costs.

Every attempt made to eliminate the gap failed. As the promoters held a small percentage of equity, the concern was that poor performance would result in a take-over; thereby exposing the gap. It was like riding a tiger, not knowing how to get off without being eaten.

The aborted Maytas acquisition deal was the last attempt to fill the fictitious assets with real ones. Maytas’ investors were convinced that this is a good divestment opportunity and a strategic fit. Once Satyam’s problem was solved, it was hoped that Maytas’ payments can be delayed. But that was not to be. What followed in the last several days is common knowledge.

1. That neither myself, nor the Managing Director (including our spouses) sold any shares in the last eight years — excepting for a small proportion declared and sold for philanthropic purposes.

2. That in the last two years a net amount of Rs. 1,230 crore was arranged to Satyam (not reflected in the books of Satyam) to keep the operations going by resorting to pledging all the promoter shares and raising funds from known sources by giving all kinds of assurances (Statement enclosed, only to the members of the board). Significant dividend payments, acquisitions, capital expenditure to provide for growth did not help matters. Every attempt was made to keep the wheel moving and to ensure prompt payment of salaries to the associates. The last straw was the selling of most of the pledged share[s] by the lenders on account of margin triggers.

3. That neither me, nor the Managing Director took even one rupee/dollar from the company and have not benefitted in financial terms on account of the inflated results.

4. None of the board members, past or present, had any knowledge of the situation in which the company is placed. Even business leaders and senior executives in the company, such as, Ram Mynampati, Subu D, T.R. Anand, Keshab Panda, Virender Agarwal, A.S. Murthy, Han T, SV Krishnan, Vijay Prasad, Manish Mehta, Murali V. Sriram Papani, Kavale, Joe Lagioia, Ravindra Penumetsa, Jayaraman and Prabhakar Gupta are unaware of the real situation as against the books of accounts. None of my or Managing Director’s immediate or extended family members has any idea about these issues.

Having put these facts before you, I leave it to the wisdom of the board to take the matters forward. However, I am also taking the liberty to recommend the following steps:

1. A Task Force has been formed in the last few days to address the situation arising but of the failed Maytas acquisition attempt. This consists of some of the most accomplished leaders of Satyam; Subu D, T.R. Anand, Keshab Panda and Virender Agarwal , representing business functions; and A.S. Murthy, Han T and Murali V representing support functions. I suggest that Ram MynampÃ ti be made the Chairman of this Task Force to immediately address some of the operational matters on hand. Ram can also act as an interim CEO reporting to the board.

2. Merrill Lynch can be entrusted with the task of quickly exploring some Merger opportunities.

3. You may have a testatement of accounts’ prepared by the auditors in light of the facts that.I have placed before you.

I have promoted and have been associated with Satyam for well over twenty years now I have seen it grow from few people to 53,000 people, with 185 Fortune 500 companies as customers and operations in 66 countries. Satyam has established an excellent leadership and competency base at all levels. I sincerely apologize to all Satyamites and stakeholders, who have made Satyam a special organization, for the current situation. I am confident they will stand by the company in this hour of crisis.

In light of the above, I fervently appeal to the board to hold together to take some important steps Mr T R Prasad is well placed to mobilize support from the government at this crucial time. With the hope that members of the Task Force arid the financial advisor, Merrill Lynch (now Bank of America) will stand by the company at this crucial hour, I am marking copies of this statement to them as well.

Under the circumstances, I am tendering my resignation as the chairman of Satyam and shall continue in this position only till such time the current board is expanded. My continuance is just to ensure enhancement of the board over the next several days or as early as possible.

I am now prepared to subject myself to the laws of the land and lace consequences thereof.

Beware Of Free Gifts Messages For Christmas, New Year: These Can Steal Your Money,…

Warning By Govt For All Indians: OTPs Can Be Stolen During Calls, Never Merge Calls…

Horrors Of Online Marketplace: Buyer Asks For Test Ride Of Bike, Runs Away With The…

First Time Ever, Facebook Reports Decline In Profits: TikTok Is The Main Reason?