The number of Telecom Subscribers have fallen further and that too in a big way. According to the monthly TRAI report, December 2012 witnessed biggest in mobile subscriber numbers till date. A fall of 2.91 percent or whopping 25.88 million!

Let me be clear, this is not the true reflection of what is going on ground. Obviously, Indians have not surrendered their mobile numbers, but it is part of system cleansing which is going on. The fall in numbers is seen because any number that have not been used in last 3 months are deactivated by the operators and reported and hence the fall.

Prior to 2012, unused mobile numbers did not get deactivated and were not reported as well leading to a large percentage of idle unused forming part of overall telecom subscription data.

Mobile Subscriber Numbers over past 2 years 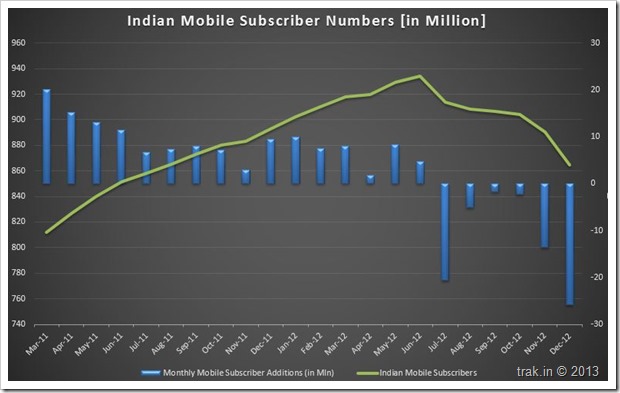 In last 6 months alone, a fall of close to 70 million mobile subscribers has been reported,

– 2.94 million new Mobile portability requests were made in month of December 2012, taking the total tally of MNP requests since launch to 80.06 mln

– Wireline Subscriber base fell to 30.79 mln as compared to previously 30.87 million.

In December 2012, Reliance lost huge chunk of subscribers in tune of over 15.5 million Two largest falls in the subscriber numbers have been due to Reliance. In July 2012 they had lost over 20 million subscribers. Reliance and Tata have probably suffered the most due to Mobile Number Portability as well as due to inactive mobile number deactivations.

Vodafone, Tata, Bharti, Aircel all of them lost mobile subscribers. However, one of the new entrants Unitech (who are playing the tariff card right now) actually gained close to million subscribers. Even though Bharti lost subscribers in December, they consolidated their Indian Market share lead from 20.62 percent to 21.04 percent. Vodafone also increased its market share from 16.93 percent to 17.05 percent. On the other hand Reliance fell over 1 percent from 15.06 to 13.71.

If the trend continues, Idea who have been one of beneficiaries of MNP will displace Reliance to be the 3rd largest telecom operator in India.

Android vs. iOS (Does it matter?)