The rules of the minimum qualifying service requirement to obtain promotion for a central government employee have now been modified.

This change has been carried out as per the directions of the 7th Central Pay Commission (CPC) Pay Matrix and Pay Levels.

DoPT Changes Rules For Central Govt Employees To be Promoted

The Department of Personnel and Training (DoPT) instructed all ministries and government departments to amend the service rules and recruitment rules by replacing the current Pay Band and Grade Pay with new pay structures in accordance with recommendations of the 7th CPC and the CCS (Revised Pay Rules) 2016 in an office memo released on September 20, 2022.

The DoPT instructed all government agencies to implement the necessary changes in accordance with proper protocol.

As per the DoPT, “instructions revising the minimum qualifying service required for promotion, as per 7th CPC Pay Matrix/ Pay Levels, have not been issued so far and proposals for framing/ amendment of RRs/Service Rules are still being considered, based on the requirements prescribed in OM dated 24.3.2009.”

The DoPT has also stated that although the levels in the 7th CPC Pay Matrix’s Amended Pay Matrix mainly correspond to the 6th CPC’s previously revised Grade Pays/Pay Scales, it was thought necessary to set minimum qualifying service requirements for promotions as per the Pay Levels in the Revised Pay Matrix.

The following will serve as the foundation for the updated standards of minimum eligible service needed for promotion for central government employees: 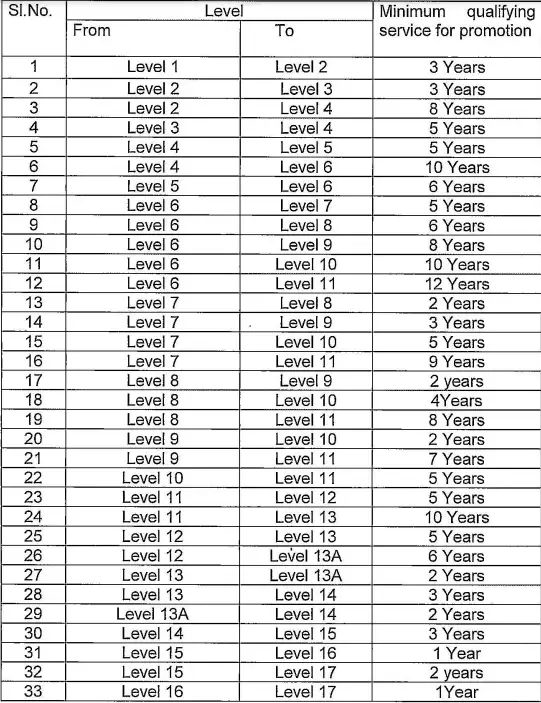 DA To Be Hiked By 4 Percent?

It was recently reported that the Dearness Allowance of the employees could by hiked by 4 percent. This would mean that the total DA could reach up to 38 percent.

A hike in DA this month has been hinted by the All-India CPI-IW for the month of June. Not just the hike, but also the employees may also get arrears for the months of July and August.

The DA component of central government employees is revised twice a year. In January to June, the first DA is given. The second DA comes from July to December.

An engineer, a history buff and a book-eater. A writer with a newfound interest in technology, attempting to build a bridge between the two!

Comments are closed, but trackbacks and pingbacks are open.