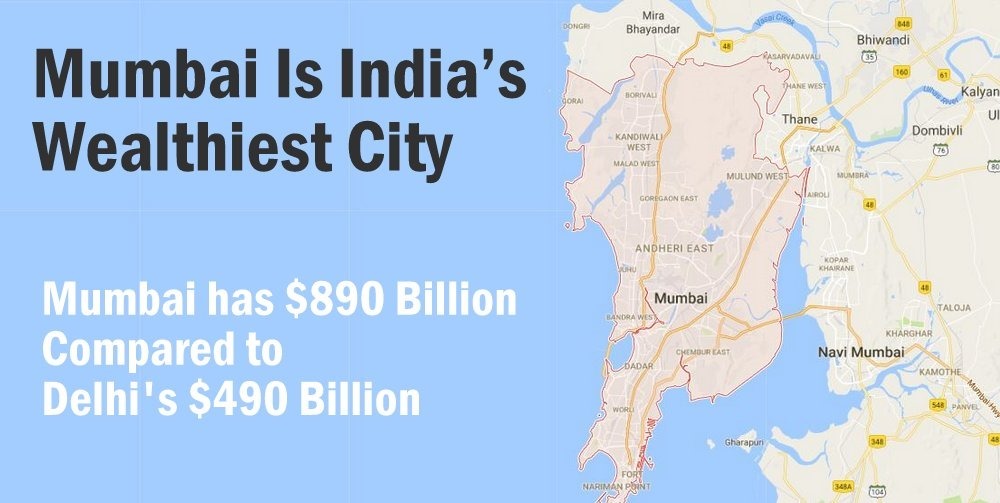 Mumbai, the City of Dreams, has once again proved why it attracts people who want to become wealthy. With $820 billion wealth, 46,000 Millionaires and 28 Billionaires, Mumbai is India’s most wealthiest city as per a recent report by New World Wealth.

If we talk about only wealth, other major cities are right now way behind Mumbai in generating wealth. While Kolkata only managed $290 billion wealth last year, Delhi is at #2 position with $450 billion wealth, 23,000 millionaires and 18 billionaires.

Here is the breakdown of wealth accumulated by the biggest 7 Indian cities:

The report also mentions some of the richest areas within these cities, from where maximum number of millionaires and billionaires were found:

But.. Exodus Of Super-Rich Continues

This way, India is 4th largest country in terms of exodus of millionaires for better pastures abroad. Globally, 82,000 millionaires left their mother country to settle abroad.

Here are the top countries from where millionaires migrated to other countries:

European countries like Belgium, Germany, Austria, the UK, Holland and Sweden are also witnessing heavy migration, and in the coming months, these would top the charts.

Australia seems the most favourite country for super-rich immigrants, as it welcomed 11,000 millionaires from other countries in 2016, closely followed by US where 10,000 millionaires landed up for migration.

Canada, UAE and New Zealand were other major countries where millionaires relocated in 2016.

Interestingly, New Wealth World report doesn’t list India’s migration of the millionaires as a major problem, because India is one of those countries where more millionaires are being created, compared to those who are leaving.

AMD Launches Powerful ‘Ryzen’ Processors to Take on Intel i series; Prices Start at $329 for Ryzen 7