Technology & Internet are actually a catalyst for growth; not only it enables opening up of new avenues for growth but it also empowers traditional business models to flourish and develop.

Something similar has been witnessed in the case of India Post; whose eminent death was flashed once emails and social media portals sprouted up all around.

After all, who will use ‘snail mail’ now, questioned the technology evangelists. But the same technology and Internet is now powering India Post’s incredible revival which even Government couldn’t imagine a decade ago.

Cash of Delivery model propagated by leading ecommerce companies in India has now enabled India Post to churn our revenues worth Rs 1000 crore during the first 9 months of this current fiscal year. And going by the trends, the overall revenue growth may be the highest for India Post by the time March, 2016 ends.

In fact, revenues from such CODs orders which originate via ecommerce portals such as Amazon, Flipkart and Snapdeal has doubled in the last 9 months. And as per Telecom Minister Ravi Shankar Prasad, this new opportunity of growth via ecommerce portals will continue to surge for India Post.

Last year, we had reported how ecommerce has enabled COD revenues worth Rs 280 crore for India Post; and the trend continues.

As per the data available, deliveries to Tier 2 cities and rural hinterland of India are propelling this incredible growth for India Post. And as per Minister Prasad, the overall revenues will cross Rs 1500 crore by March, 2016.

He said, “The new facet is cash-on-delivery. India Post has become the premium courier service for e-commerce, so that is a definite improvement. (India Post’s revenues from) cash-on-delivery is going to be Rs 1,500 crore by the end of this year (fiscal ending March, 2016)”

Considering the fact that India Post has an unbeatable spread and reach across Tier 2 cities, as 90% of 154,866 post offices are situated in Tier 2 and Tier 3 cities, ecommerce portals are happy to partner with them for COD and other deliveries.

Minister Prasad said, “There are local products such as Madhubani paintings of Bihar, so they (India Post) are also going big on these deliveries. They are getting good money for handicrafts and artisans. About 65 per cent of the catchment area is small towns for e-commerce” Ecommerce Portals Which Are Driving Growth

If we talk about the consignments from ecommerce portals, then Amazon India is the biggest driver for growth when it comes to using India Post’s platform. Compared to 50,000 orders a month during 2014-15, Amazon is now sending 300,000 parcels a month using India Post’s network and reach.

Snapdeal’s monthly orders have increased from 35,000 to 80,000 right now whereas Flipkart/Myntra collectively sends 80,000 parcels a month. 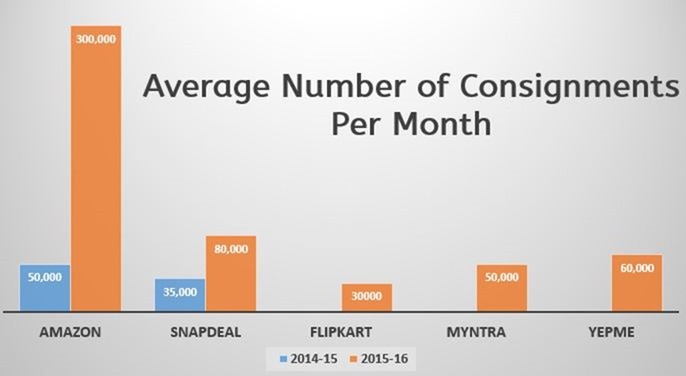 Earlier, we had reported that Amazon India, Snapdeal and Shopclues have already partnered with India Post for CODs across India; while their association with Paytm and others have helped them to boost parcel revenues by 37%.

Besides converting your selfies into postage stamp, India Post will also take on Alibaba’s massive B2B platform and will also launch their own payment bank very soon, which has been approved by the Government.

India Post’s newest app called Post Info is already launched with a focus on ecommerce; and this is just a beginning.

Has Amazon Found The Answer To India’s ‘Change’ Problems With Amazon Pay?