Book Review: Googled By God ..In Search Of Money (and exclusive interview with the author) 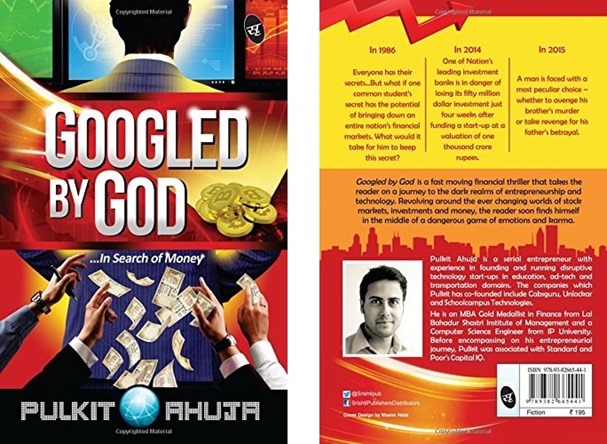 The market of Indian fiction in English is right now drowning in an avalanche of teddy-bear romance and purpose-less love stories, being churned out by young enthusiast brigade of writers who wish to unleash another mass-loved Mills and Boon franchise in the country.

Although nothing against such heart-warming stories, but we need something more, a bit more hardcore and realistic saga which can inspire and educate at the same time; Something which attracts new readers from different niches, something which can be defined as a new milestone of Indian literary scene.

If we only talk about the fiction of financial/banking world, then I am afraid besides the enchanting, solid tales of Ravi Subramanian (author of If God Was a Banker (2007); Devil in Pinstripes (2010); The Incredible Banker (2011); The Bankster (2012) and more), there aren’t many good Indian authors. This niche was starving for some real action, for quite some time.

But here comes Pulkit Ahuja, with his debut novel: “Googled By God ..In Search Of Money”, which has the power to create some dent in the niche of financial fiction; and his effort, is making some serious noise out there.

“Googled By God ..In Search Of Money” is an interesting maze of a story, set across a canvas of 30 odd years, taking the reader into a whirlpool of financial world, thereby introducing a whole new segment of fiction. Using entrepreneurship and technology as the cornerstones of this story, Pulkit efficiently induces an edge-of-the-seat thriller which I found unique, and different.

Imagine a software which can predict stock market prices, and which can generate insane amount of wealth for it’s user. Now imagine this software in the hands of a Russian mafia, who wants to protect it at any cost. Now mix this imagination with an evil Venture Capitalist who will not shy away from killing a new, winnable entrepreneur, just to take control of his patented new business idea.

Weave a subtle amount of romance, brotherly love and family values into the whole mixture and what you get is an amazingly fresh, innovative and exciting story which will be hard to put down.

Yes, there are some hiccups in between; for instance the way three different stories interlink in the middle may seem a bit far too stretched; or rather the way such a powerful machine was allowed to manipulate Indian stock exchanges for such a long time.

But the level of technicalities which the author has induced into the novel will balance it off; the way he has described and explained the nuances of stock markets, VC-funded startups, and the innocent dreams of a young entrepreneur will allow you to dismiss such minor hiccups with a wave of hand.

And, considering that it is Pulkit’s debut novel, I am tempted to give full marks to the imagination and flights of fantasy embedded into the story.

Who Is The Right Audience?

Entrepreneurs would love this novel, so will 9-5 corporate sector wizards, who are into the technology and financial niche.

I doubt whether connoisseurs of romantic novels will like this offering, but I will suggest that they should try. Lovers of a good, compact story and interesting plots will no doubt appreciate the book.

We also managed to take a brief interview of the author, Pulkit Ahuja, and tried to get some more details about this book. Here are his answers:

Question: When did the idea of this fiction novel blossomed in your creative mind: While studying MBA or while creating companies?

The idea of writing a novel revolving around a fictionalized account of startup ecosystem in India took seed while I was heading Unlockar, my previous venture. I see so much happening in this space every day, the thrill is simply overwhelming if you consider the things that we and fellow entrepreneurs who are a part of this ecosystem are trying to accomplish. I felt this excitement needed to be shared with the readers in India and that the time was ripe to create a niche in this segment.

Having said that, the basic premise underlying this book – the one of the machine Noek, which has been portrayed as a financial God, was an idea that I proposed and was working on in my free time during my days in Standard and Poor’s Capital IQ. Once I left the company to start Unlockar and there was no one else left to take this product further, I felt that this concept should not die a slow death of ignorance and it deserved to be shared even if I was no longer working on making it a reality.

Question: Do you think that your financial background and experience in creating startups will help you in writing more financial thrillers?

Definitely. I find financial technology as a space where nothing is impossible. Thus, while writing financial thrillers, the possibilities and opportunities of ideating and introducing new concepts to glue my readers are endless – all you need is to think bigger and better. On the other hand, Startups is what I love and writing about them excites me to the core. So I am sure you will see a lot more financial thrillers with an entrepreneurial flavour in the coming times from me.

Question: Imagine that the software you created in this fictional story becomes a reality. How can it impact the market; and is it even possible to make such a software?

Imagining the machine to be a reality is not very difficult for me. In fact I know a few startups who are working on similar lines to develop a product that would resemble this machine when completed. So yes it is very much possible to make such a machine work in real life, especially in our ever increasing socially networked world where even our deepest of emotions and thoughts feel incomplete unless we have shared them on our Facebook profiles or tweeted about them.

So, creating an artificial intelligence to take in all those emotions and thoughts in the form of raw data and process it to predict our actions and behaviour is the next logical step for any data scientist.

But again, developing such a software and making it public are two completely different things. The realization that even today many technologies exist which are being used without public knowledge is a testimony to this fact. Thus, I don’t think there would be a huge visible market impact even if there happen to exist multiple versions of such software working in a given stock market simultaneously.

Question: There are glimpses of some popular mobile wallet startups in the story… Do you think that mobile wallets are the next big thing in India?

I think that mobile wallets have already become a big thing in India. As a concept and business model, mobile wallets have proven that they are an essential component of the e-commerce value chain. Many of the conventional banks are now introducing their wallets to avoid being left out, which indicates that this industry is only getting hotter by the day. On how big can this industry get on a standalone basis needs to be seen as I feel that there is a huge potential for the wallets concept to get disrupted in its current state. So we would either see the existing providers innovating on their current offerings or some new startups introducing disruption and adding value to the existing wallets space. Either ways, there is plenty of action coming up for wallets in India.

Question: What advice will you give to new writers, who are attempting to complete a novel? How did you convince the publishers? How did you scoop out the time for writing?

Most of my writing happens on flights and after office on my way back home. My advice to new writers would be that they should concentrate more on thinking through the concept for their book on a broad level and not delve too much into the specifics of their story during the starting stages. They should involve themselves in forming a good overall structure for their storyline and then try filling in the gaps with specifics on the fly while writing individual chapters and scenes. About convincing the publishers, I don’t think that is something that one should be worried about if they have a good story to be told, but patience is important while waiting for the publishers to revert back to you.

Question: Tell us something about your next book…

Well, I haven’t written much of it yet and a major part of the plot is open for changes, but a second Financial God is certainly on the cards. The technology will get much fiercer and the plot will be much more advanced in the next book. The scenes would shift from Indian startups to more of a globally linked economy and ecosystem. I don’t think disclosing any further would be fair to the readers keeping in view that it is going to be a one of its kind mind bending thriller.

You can buy the book here: Flipkart | Amazon

Siemens To Invest One Billion Euros In India – Make In India’s Biggest Investment From an European Co.!