DoT Asked To Ban WePhone App Due To Call Spoofing 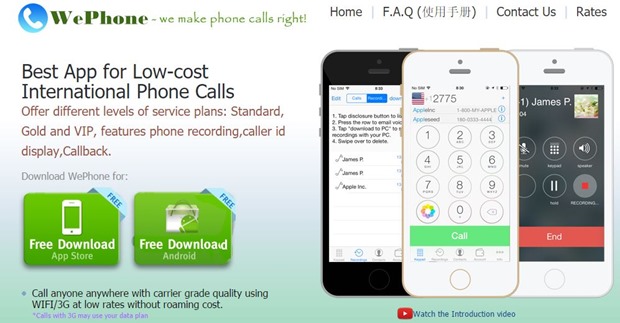 In an initiative to protect the caller’s identity, the Department of Telecommunications (DoT) has been asked by an Intelligence Agency to block the use of WePhone app. It has been noticed that this app allows a caller to conceal his or her identity which is unethical.

As per Minister of Communications & IT Mr. Ravi Shankar Prasad, “A reference from an intelligence agency was received by the Department of Telecommunications to block the ‘WePhone’ App which facilitates its subscriber to spoof the Calling Line Identification (CLI) through Voice over Internet Protocol (VOIP) platform.”

WePhone app works on a very simple mechanism. It transfers a call using a router to the server which is located abroad, that depicts the original location of the caller. People who receives the call doesn’t get a clear idea of exact incoming number and location.

This app tries to spoof the CLI mechanism through VOIP which is illegal in the eyes of DoT and that is why a Technical Committee has been formed regarding such activities. Caller ID spoofing can be used to create some prank calls or can be used to make anonymous threat calls  that can be harmful for any nation.

What is Caller ID Spoofing?

Caller ID Spoofing is a service that helps to masquerade the original number and the recipient sees a different number in his display. It has a similarity with e-mail spoofing where sender can use any address to send a mail.

Same here in case of Caller ID spoofing, one can choose any number that will be displayed in the recipient’s phone. The process is also very simple, where the customer opens a web form and enter the actual phone number, the phone number of the recipient and a chosen number that will appear in the recipient’s caller display. The technical committee made in respect to CLI spoofing has found that some computer or mobile applications are providing such service.

MR. Prasad further added that, on the basis of the suggestions given by the committee, the entire subject has been taken up with the Group Coordinator, Department of Electronics & Information Technology who actually issued the order of banning such identified websites who are involved in spoofing.

This is also probably for the first time that any such requests have been made to DoT for banning a mobile app for call spoofing.

Can WePhone app be effectively banned?

The question is how can DoT ensure the ban? Because, even if the app url is banned, users can still download it from Play Store, and even if they manage to somehow block it on play store as well, users can just directly download the app from WePhone website and start using it.

And if a wephone app user uses this app to make calls through internet , there is no way DoT can differentiate from ordinary internet traffic.

So, the question really is – Can this app be effectively banned. We think not…

6 Things Every Programmer Should Know About A Marketer!