Reliance, which is India’s most powerful public company (as per Forbes ‘Global 2000 List’) has launched their first purely ecommerce portal: RelianceFreshDirect.com. 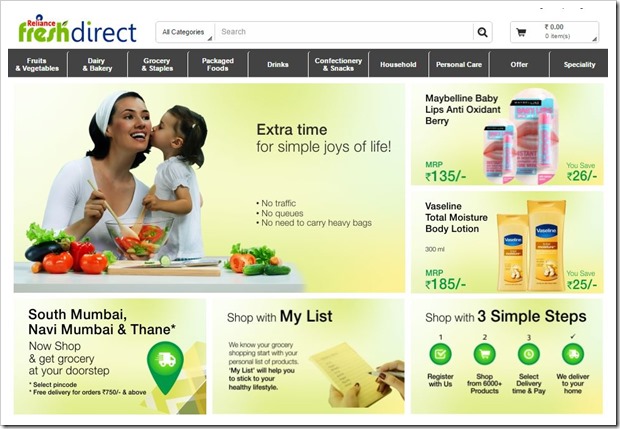 They are targeting households in Mumbai who wish to order grocery items from the comfort of their homes and offices. As per the website: “No more hassles of sweating it out in crowded markets & grocery shops & supermarkets – now shop in comfort of your home; office or on the move & select from a wide range of 6000+ products.”

Initially, they are targeting only few selected areas in Mumbai such as Thane, Navi Mumbai and South Mumbai. All the products which are right now available in Reliance Fresh and Reliance Mart store would be gradually sold via this ecommerce portal.

One spokesperson for the company released a statement: “The launch of RelianceFreshDirect.com adds the ‘direct delivery’ channel to our network, besides convenience and choice to our valued customers. Over time we will certainly augment the direct delivery model.”

This news of Reliance entering an ecommerce segment which is already quite competitive with major players such as BigBasket.com, LocalBaniya.com among others who offer to deliver fresh grocery products at doorsteps.

Earlier, speculations were rife that Reliance may enter pure ecommerce sector, but there was no concrete evidence to suggest. With launch of this grocery portal, all apprehensions have been laid to rest.

Indian Ecommerce will never be the same again.

Ecommerce Vs Traditional Business – The Beginning

Ever since ecommerce industry starting to shape in India, major business houses such as Reliance & Tata had avoided taking any concrete step to cement their position. Most probably, they ignored this niche, assuming that it’s still too early for Indians to shop online.

But with million billion dollar fundings and even bigger valuations of India born ecommerce portals such as Flipkart and Snapdeal, entry of global ecommerce giants such Amazon and their pledge of billions of dollars of venture capital has changed the scenario now.

We had reported how Tata now plans to enter the online space, as evident by the management reshuffle in the last few days. Ratan Tata has already invested in couple of ecommerce ventures in his personal capacity.

And now, this entry of Reliance into the Indian ecommerce sector will sure stir things up, and attract even more traditional business conglomerate to enter the dynamic space.

On the same hand, it is also important to note that the traditional ways of doing business will need to be changed when it comes to the digital platform. For example, Reliance patiently waited for 7 years and invested close to $1 billion into Reliance Retail, before reporting profits. Considering digital space is more dynamic and ever-changing, the ecommerce team in Reliance will have to act fast, and act tough.

Recently, religious sentiments of shareholders convinced Reliance to quit Rs 40,000 crore non-veg products business. Although their profit margins would be negatively impacted, they can afford that. In case of ecommerce industry, such selected omissions and decisions based on religious sentiments can prove to be a costly mistake.

If you are from South Mumbai, and wish to test the first ever ecommerce portal launched by Reliance, then do share your experience with us, by commenting right here!