Indian Government’s ambitious project to become a leader in solar power generation is now about to begin as biddings are invited from prospected vendors to build India’s biggest solar power capacity. 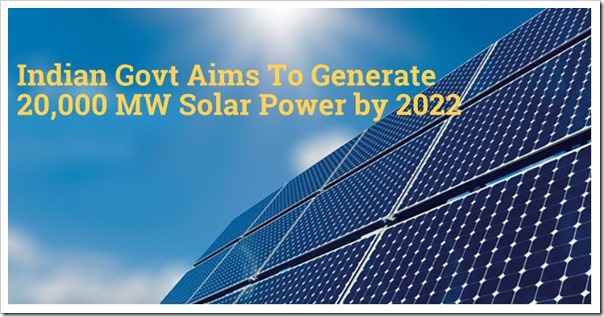 This solar power mission has been claimed as the first success story wherein all three energy departments of Indian Government: coal, power and renewable energy collaborated and worked as a team to achieve success for generating solar power at such a huge scale. The solar power thus generated would be pooled in with unallocated conventional power and sold to states with energy deficiencies at a rate decided by the average of distribution companies.

As per the official communications, this bundling of different energies (solar, coal, power and renewable) would be managed by NTPC Vidyut Vyapar Nigam (NVVN) which is the power trading arm of National Thermal Power Corporation Limited (NTPC).

The good news is that the average cost of a unit in this bundled energy package would be 30-40% less than the current prices of solar power. As per the officials of NTPC, the cost of solar power has come down drastically in the last 3 years.

A brief look into the numbers in this solar power generation scheme in India:

In addition to that, Government is also trying to launch mega power projects of 1000 MW which will further push the prices down.

Generation of solar power is indeed one of the biggest priorities of the current Modi Government as Northern India is currently facing acute shortage of power everyday. Once phase 2 and phase 3 are completed, we can be assured of uniform power distribution in rural as well urban India.

Here are updated records and data related to solar power projects under Govt. of India.

You Can Soon Switch Your Power Company Like Mobile Services; Major Power Reforms…