Auto Expo 2014 is a bumper hit this year as more than 3.2 lakh people have thronged the Expo Mart campus in Greater Noida to witness World’s second largest Auto Expo, live in action. Newspapers reported that 60,000 people visited the expo on 7th, 1.1 Lakh on 8th and around 1.5 lakh on 9th. The event is still on for two more days, and more auto enthusiasts from all over the country are expected to visit the expo in these two last days.

The event is being organized in Expo Mart, which is a huge sprawling campus located in Greater Noida, some 35 kms from Delhi. Previously, the event was organized in Pragati Maidan, which is in the heart of the capital.

But despite such far off location, and chilling cold, Delhi-ites and auto-enthusiasts from all over the country visited the event, and took part in the scintillating event. There were some hiccups while managing the huge crowd, but the event organizers must be congratulated on smooth flow of traffic and easy navigation.

All the stalls are being interconnected, and helpful personals are positioned all over the campus. They have organized special ferry buses, which takes participants from one end of the facility to the other, free of charge.

The automobile companies taking part in the event have left no stone unturned to match the event with their presentations and the hype. Giant screens have been erected all over the ground to showcase the latest updates and advertisements.

Some of the major car launches which happened this year: We had earlier reported about this revolutionary car which is all set to hit the Indian roads. Maruti launched this car on the second day of the event, keeping the price surprisingly affordable between Rs 3.9 lakh to Rs 4.96 lakh.

With a capacity of 998 CC, this car can easily accommodate 5 people. With all new AMT (Automatic Manual Transmission) that serves gear-shuffle, there was tremendous buzz around this car in the event. Nissan unveiled a new Friend-me concept car, which was one the huge attractions of the auto expo. The car has been designed after collaboration between Nissan Design China (NDC) and NGDC (Nissan Global Design Centre). With its dynamic design and extremely futuristic cabin, the car showcases an advanced multimedia system wherein passengers can share pictures, videos and music directly from their mobile devices. Mahindra stunned everyone present at the event by launching its ultra-sleek Halo electric sports car. The company claimed that this car can reach 0 to 100 KMPH in 8 flat seconds. It’s top speed is 160 KMPH, and after a full recharge, the car can be driven upto 200 kms.

Unfortunately, due to delay in clearance from Government, this car would be initially launched in overseas market.

Tata Motors unveiled Nexon, which can be described as a concept SUV with some real innovative design. The interior of the car has been designed keeping in mind the requirements of the youth and the design reflects the futuristic concept of the company. Overall Tata has launched 18 new vehicles during the Auto Expo. 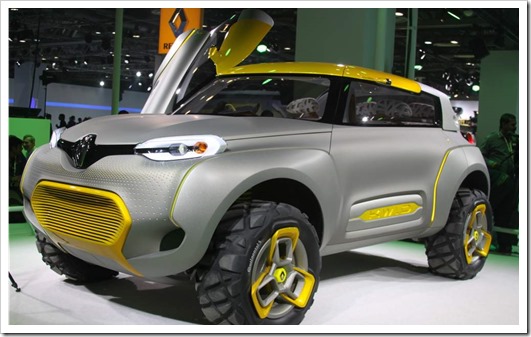 KWID is the first concept car unveiled by Renault outside Europe. The SUV has been designed keeping in mind the connectivity and sharing of multimedia, on the go. It has a new “Flying Companion” security concept, which makes driving this vehicle lot more safe and secured. KWID seats are suspended over a solid base in white in a 2-tone elastomer material to enhance lightness and brightness. Bike enthusiasts were surprised by the launch of SS400 and CS400 bikes by Bajaj. Both the bikes provide a punch with 75 CC liquid cooled 4 valve engine, which is capable of providing 6-speed transmission with fuel injection. The bikes get anti-local braking system as standard feature.

The event is still on, and will conclude on February 11, 2014. If you are around Delhi, and love cars and automobiles, then this is a must-visit event.

Do share your experiences and feedback about Auto Expo 2014, right here!

Maruti Suzuki To Launch A Car Without Clutch… No, It Is Not Automatic Transmission!