IPL 2013 is round the corner and its popularity has been growing especially on Internet and mobile. Every year more number of people are watching IPL live on their mobile devices. Infact, if you compared the ratings for TV, they have been falling, but usage of computers and mobile devices to stream IPL matches is on the rise.

This year’s IPL will be different than previous years – It is no more DLF IPL, but Pepsi IPL, as Pepsico India has bagged the title sponsorship for next five seasons. In regards to broadcasting of IPL matches, MSM (Multi Screen Media) have the global TV broadcasting rights and Times Internet have global media rights for mobile, radio and internet from 2011 to 2014. 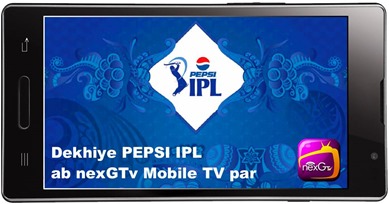 For this year’s live streaming of matches on mobile, Times Internet have partnered with DigiVive’s Mobile TV service nexGTv. Users will be able to view all the 76 IPL matches on their handsets using nexGTv mobile application available on nearly all mobile platforms including Android, iOs, Nokia, Blackberry and Windows.

According to press release sent to us, along with live streaming of matches, nexGTv will also offer match repeats and highlights in the Video-on-Demand section. Pepsi IPL channel will be clubbed into existing subscription packs of nexGTv hence users can watch it by subscribing to these packs.

If you are not an existing NexGTv user, just send a SMS “mytv” to 58888, or simply visit app store on your mobile and search for nexGTv app.

The good aspect of nexGTv is a mobile user can live stream even on slower 2G connections which uses nexGTv adaptive streaming technology. If you are not aware they also offer host of other channels including Sony bouquet, Star bouquet, Aaj Tak, Asianet, Raj Channels etc.

So, if you want to watch IPL on your mobile, you know where to go!