Here are the details:

ICANN received total of 1930 applications of which 66 were geographic name applications and 116 applications were for Internationalized Domain Names, or IDNs, for strings in scripts such as Arabic, Chinese, and Cyrillic. All the remaining ones were in English language.

The gTLD applications were received from 60 Countries and here is a geographical break-up of same: 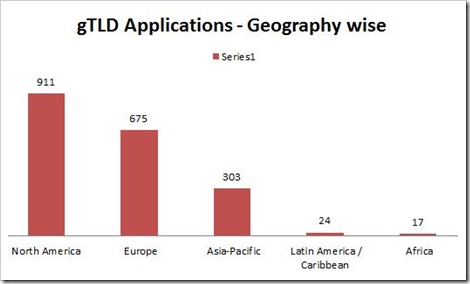 Out of the 21 domain names, I was really surprised with one entry, that of Infibeam, the leading ecommerce site in India. Infibeam went for extension .ooo (those are not zeros). I really don’t know the reason behind getting such a domain extension, but it will be interesting to see how Infibeam will be using this.

Now, although ICANN has approved the application, these companies will still have to wait for sometime before these gTLDs become operational. If anyone objects to an application and believes they have the grounds to do so, they can file a formal objection to the application. And they will have seven months to do that. Overall, it will probably be close to a year before we see these domain names used by companies.

PUBG Mobile 2 Launch Soon, Will Be Available In India? PUBG…