The Akamai State of Internet report for Q4, 2011 is out – and it does not paint a good picture for India. Among all the countries surveyed by Akamai, India is the only country in Asia to have average internet speed of less than 1 mbps and less than 1% broadband adoption rate. India does make in Top 10 of one particular list (which it should not) – India has 9th highest rate of attack traffic in the world and 5th highest in Asia. As far as narrowband connectivity (below 256 kbps) goes, India comes in at 5th in the world. More than quarter of Indian internet users are on less than 256 kbps connectivity, making India one of the countries having slowest internet connectivity.

Akamai report states, India was the only country with high broadband (> 5 mbps) adoption rate of below 1%. Given such low penetration, one would think that India would be experiencing tremendous growth, however, that is far from truth. The report states that after strong growth in the third quarter of 2011, it lost whooping 26% in the fourth quarter, ending the year at meagre 0.5% high broadband adoption. Even countries like Thailand (6.7%), Malaysia (3.8%) and China (1.5%) have much higher percentages of high broadband connectivity. There is one silver lining – although speeds above 5 mbps have not grown much, normal broadband connectivity (above 2 mbps) have grown at decent rate of 85% year on year. But again, if you look at QoQ growth, India showed a negative growth of 18%. So we have lesser internet consumers on 2mbps connectivity then what we had in previous quarter. India ranks a very lowly 88th in the world when it comes to rate of broadband adoption. Only 8.4% of Indian internet consumers have over 2mbps internet connections! 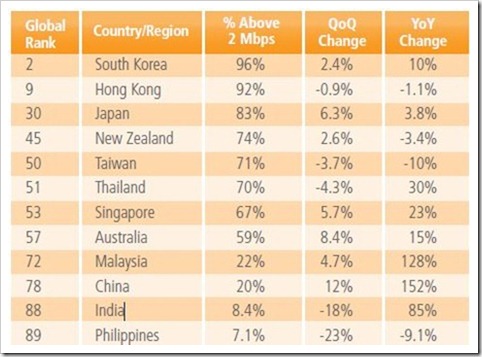 It is fair to say that India has missed the terrestrial broadband revolution – However, I ‘d expected that these numbers would be much higher due to launch of 3G. Looks like we have a fair way to go before we can call ourselves an IT hub.

Would be interesting to know reader’s views on this!