Yeah you heard that right, Reliance Tablet for Rs. 8000…that to LTE (commonly called as 4G)…

India is still getting itself to familiarize with 3G tablets and looks like it will take a leap forward and get the Long Term Evaluation (LTE) Tablets too. Reliance which is a monopolized service provider for LTE/BWA spectrum is planning to launch a LTE tablet in 2011. As per Afaqs, 15 Taiwanese vendors are already lined up for feasibility and prototypes.

LTE can be loosely called as 4G. 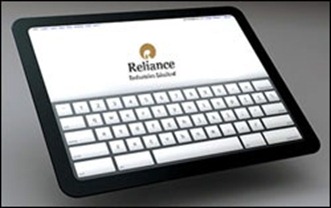 Reliance 4G Tablet might run Android OS or Java based operating system. To put things in to perspective, there aren’t a whole lot of LTE tablets across the world. US is getting its LTE services started with LTE phones coming in and tablets still far away.

Coming to India, there are less than 10 tablets launched in India and few of them did not have 3G capabilities. The cheapest tablet launched is Wespro Pad, which costs Rs.7999. Reliance Tablet is hitting two things with a single shot. At that cost it will make all expensive tablets redundant and with the 4G speeds (upto 200mbps downlink and about 70mb uplink), it will conveniently push out 3G tablets and probably the service providers too. What would you subscribe to 4G plan or 3G plan, if you have a 4G tablet?

A killer move by Reliance. Reliance Infotel is the company in picture and this belongs to Mukesh Ambani’s Reliance Industries. Living in India and witness technology changes, gadget launches across the world has always been painful. For a change, it is turning out to be a boon. I really hope this turns out good.

If Nokia launching Microsoft phone is a big moment, Indian company launching a 4G tablet in 2011 would be huge. Really really huge. Bigger than Notion Ink, if you ask me.

Covering technology and gadgets for TGF in last two months and witnessing technology innovations on daily basis, I firmly believe that we are lucky to live in this era, so much change in such a short span of time. Imagine what we will see in next 10 -15 years. India could replace Korea or Japan to become the next hub for all the latest gadgets. Don’t you think so?

Note: you may be interested in video review we did on Apad / Wopad Android tablet