I found this for the first time. BPO Voice an online network of BPO professionals has a survey and a report about the economic outlook for BPO and outsourcing industry.

I felt it is appropriate to get a broader sense from our readers. The questions put are very relevant though the sample size 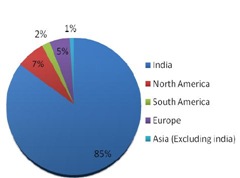 and demographics are skewed towards India. The overall opinion is optimistic which is a very good thing.

The demographics are tilted towards India with 85% of the people interviewed are from India. This might be a good indication about the increased optimism about India’s future as an outsourcing destination.

Not just the BPO and IT industry but many other industries like retail chains, real estate to the cab drivers. Everyone is a stakeholder.

How optimistic are you about Indian outsourcing story?

The full report in pdf. Images from the report.

IRCTC biggest e-Commerce contributor – Over a 3rd of the total e-Commerce pie in India!

Email providers need servers in India and the the email id’s should end with .in