No Smoking! Smoking in Public Places is Prohibited in India! 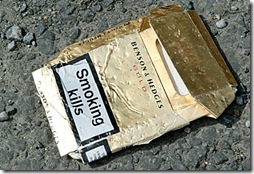 A new regulation bans smoking in public places starting October 2nd (today). Today is Mahatma Gandhi’s birthday. As a tribute to the father of the nation, this would come into affect from today. Leaving whether the ban is justified or not, it is a noble initiative nevertheless.

Interesting thing is, it does not take any thing from the policy makers. It is just a law, sign it and pass it. No negotiations, no risk analysis, no nothing. Our government’s obsession with low hanging yet controversial fruits continues. Reservations are one of those things. This is the next thing. No cost involved, let’s implement!

The noble cause of this initiative is to reduce the accessibility and thus save people’s lives. I don’t think the environment is on their agenda. If successful it would help the environment too. I am not sure if this will be a success in terms of reducing the deaths. People will still try to find ways to sneak and to smoke. The law says smoking in public places is banned. Public place by definition is debatable. Is Road a public place or not? Can they smoke on the road? Would this cause people to smoke more (like 2 or 3 cigarettes at a time) because the opportunities are limited? Only time will tell the answers.

What the ban would do is, kill the mini entrepreneurs who set up shop opposite to the offices and sell cigarettes in retail. I feel for them. Most of them might not be smokers but it’s still affecting them. Tobacco products are their main source of revenue.

Smoking deaths on 2nd October 2009 would be an interesting read.

Whom would this ban affect?

3. Mini entrepreneurs right next to your office who sell cigarettes in retail.

Who would gain from this?

– Non-smokers, kids and others affected by secondary smoking

– Corporate(s) and companies with employees. Productivity might increase (debatable)

– Kids who sneak and smoke.

Police (cops and traffic guys) will benefit enormously from this ban. Do I need to explain why? I think we all know but let me just mention it for completeness. This would be one more opportunity for extracting bribes and fill their pockets. Let me stop at that.

Bollywood is divided on the issue. They think smoking should be banned in public places and not in movies. How funny? I think most of the kids start smoking by imitating their favourite actors. So if there is a place where smoking has to be banned that should be in movies.

I guess the whole country is divided. Division would be smokers, non-smokers, gainers and non-gainers

This subject brings us to our next poll: