Why This Small Gujarati Village Is Not Affected By Demonetisation – 3 Live Examples Of A Cashless Economy!

On the night of November 8th, 2016, PM Modi stunned and shocked entire nation, when he banned Rs 500 and Rs 1000 currency notes. Such sudden demonetisation move was executed primarily to curb the spread of black money, to induce a fear among black money hoarders and to encourage a cashless economy.

Suddenly, 86% of the currency in use was declared illegal, and it certainly caused chaos and disruption all around.

Although this demonetization move is good for the country, its economy and for the long term progress, the suddenness of the decision triggered a kind of panic never witnessed in India. Long queues were witnessed outside bank branches, wherein desperate people were found to be exchanging their old notes, ATMs saw heavy traffic as people gasping for new currency notes tried somehow to withdraw cash for their daily expenses.

In the middle of this chaos, there is a small village in Gujarat, called Akodara, which is unmoved by the demonetization move. Around 80 kms from Ahmedabad, located inside Sabarkantha district and Himmatnagar town, business is as usual here, as farmers are buying/selling their produces, people are easily purchasing their daily needs and there are absolutely no queues outside the only ATM present in the village.

And the reason is that Akodara is India’s first and only digital village, which doesn’t use cash! Last year, ICICI Bank had adopted this village, and introduced a slew of ‘digital reforms’, which also included a major push for being cashless.

We visited Akodara to experience the thrills of a cashless economy, and were pleasantly surprised to see its advantages, possibilities and applications.

Here are three live examples of a cashless economy, as witnessed first hand in Akodara village:

ICICI Bank not only opened Akodara’s first bank branch and ATM, but they also introduced the concept of mobile banking for all villagers. And, they also made sure that mobile banking is accessible via feature phones, considering that majority of villagers are still years away from smartphones.

Due to the introduction of mobile banking, and convincing the shop-owners to use it, villagers can now buy their daily grocery needs just by sending an SMS via mobile banking.

I bought a pack of chips from a small shop situated in Akodara village, just by sending this SMS: 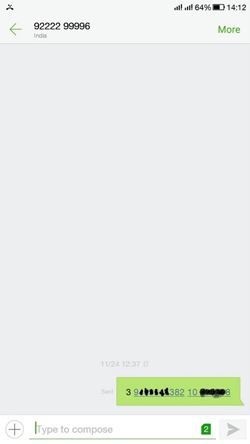 In this SMS, the first number ‘3’ is the code for buying a product, the next number is the shop-keepers’ phone number, 10 is the amount and the last number is my ICICI Bank’s last 6 digits. Once this SMS is sent to a pre-defined number meant for mobile banking, the concerned amount is directly credited to the shop-keeper’s mobile, and the transaction happens, without cashless.

As the villagers don’t use any cash, demonetization has minimum effect here.

ATM is without queues, tensions and panic

This was a sight which would be really hard to forget for a long time. The only ATM present in the village was entirely without any rush, queue or panic; unlike what is being witnessed all across the nation.

Now, as all the villagers are getting things done without using any cash, directly via mobile banking, there is no need for cash here, hence an empty ATM. A major advantage of a cashless economy!

Except Akodara, this is now the village economy works: Farmers arrive with their produces to the local ‘mandi’, the price is negotiated and then paid via cash. The same cash is then used to buy fertilizers, seeds, fodder for animals, and the cycle repeats.

Now, when the Rs 500/1000 currency notes were suddenly banned, this whole cycle got disrupted in 99% of the villages across India.

However, in Akodara, demonetization had zero effect on the overall buying/selling of agricultural produces; and the reason is being cashless. We visited the local ‘doodh mandi’ (milk marketplace), where all farmers arrive with their daily milk produce. Based on the fat content, the price is determined, and the whole amount is directly credited to the farmers’ bank account. Using the same cashless mode, the farmer then buys seeds, fodder and other requirements, and the cycle continues.

When we talked with the Chairman of Akodara’s local milk marketplace, he informed us that nearby villagers are feeling the pinch of demonetization, as they are not able to either sell or buy their produces. But thanks to a cashless economy, there has been no effect in Akodara.

Due to the cashless initiatives by ICICI Bank, villagers in Akodara are saving more (as there is no cash to spend, saving has increased), crime has reduced (robbers can’t have cash anymore) and overall, their life has change for the good.

ICICI Bank and Govt. of India is attempting to replicate the same model across many more villages in India, and in order to do it successfully, it is very important to know the advantages and possibilities of a cashless economy.

If Akodara can do it, so can rest of India.

BSNL To Provide New Connections Via e-KYC; No Need For Physical Documents Anymore!

Rs. 200 Currency Note Coming Soon; 4 Things You Need To Know About It