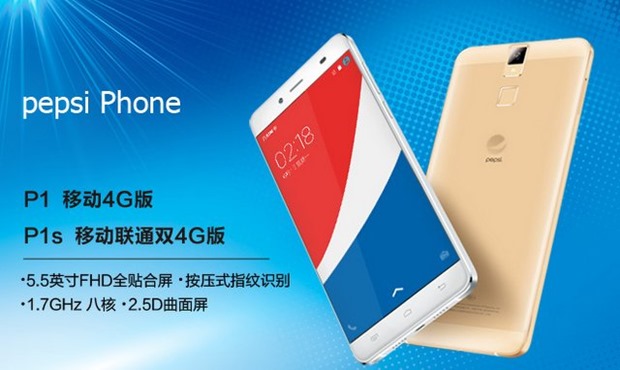 Did you ever imagine that a soda-manufacturing giant would venture into the smartphone business? The news did not strike a chord with my brain in the beginning, and it took time to process that Pepsi is going to develop an Android smartphone. There were rumours nearly a month back that the food and beverage company may introduce a new smartphone, and finally the Pepsi phone has been launched.

Having two variants, P1 and P1s, the phone will available in China initially.

What is so special about the phone?

Apart from the fact that it is Pepsi-branded, the phones do not seem to have something unique. It has the same bells and whistles or a mid-range smartphone you can get from Asus, Motorola or Samsung these days. The one interesting activity surrounding the phone is crowd funding. The smartphone is actually listed on crowdfunding platform JD Finance so that Pepsi is able to sell the phone in the Chinese market.

Yes, you read it right. The smartphone is available only in limited quantities to the customers. Pepsi is not getting into the smartphone business either, they are simply licensing the brand to a Chinese company Shenzhen Scooby Communication Equipment Co, the ones that are actually manufacturing the device. This means all the equipment and accessories will be manufactured by Scooby Communication and the device will be branded by Pepsi.

It adorns a 13MP primary camera with flash and a 5MP front-facing camera. On the connectivity front, it comes with 4G LTE, hybrid dual sim support similar to OnePlus X, and a 3000mAh battery. The phone also shows off a fingerprint scanner at the back.

Role of crowdfunding in selling the device

In the past two years, we have seen the likes of new big Chinese handset manufacturers like Xiaomi, OnePlus, Oppo and Huawei trying to sell something unique to the market. Pick any one of their phones and it will have a USP which is worth noticing and playing around with. With the same thought, Shenzhen Scooby Communication are launching cheap smartphone in China through Pepsi to gain traction and market share quickly.

While Pepsi is only licensing its brand, the real work is done through crowdfunding. The early bird handsets were available for CNY 499 ($78), however around a thousand of these are available at a higher price of CNY 699 ($110). Once these 1000 have sold out, the next batch of 1000 smartphones will be available for CNY 999 ($156) and after that for CNY 1,299 ($203) without any cap on the volume. This mean the best time to buy the mobile is now.

Pepsi aims to crowd fund CNY 3,000,000 by 3rd December and has already been funded CNY 1,356,688. This is an excellent marketing and branding strategy by the company to gain attention, however with just 9 days to go, the goal seems to be a little too farfetched.

The phone can do well in India provided there is good customer service and the phone is priced relatively well. With so many Chinese smartphones available these days, the brand Pepsi is surely going to make the phone stand out from the crowd.