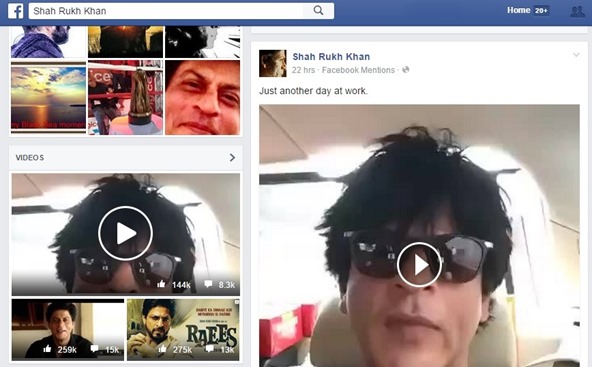 Shahrukh Khan has once again demonstrated why he is called the King Khan of Bollywood.

The day Facebook launched their new feature: Live broadcast for their Mentions app, he became the first Indian celebrity to use it. The video shot via Facebook Mentions has already crossed 1.2 million views at the time of writing.

Facebook Mentions is an app from Facebook, which is only meant for celebrities as of now. It was launched last year.

The app is only available on iOS as of now.

Public figures with verified Facebook pages would soon get a chance to use this app.

There are basically four features of this app:

The live broadcast feature in Mentions was launched yesterday, and can be initiated directly from the app, and all the fans who have liked their page will receive instant feed on their timeline. Facebook has limited this broadcast to 60 minutes at a stretch.

Facebook India team immediately contacted Shahrukh Khan to test and use this new feature of the app, and despite having a busy schedule, he promptly agreed.

As we can see in the video, Shahrukh is first seen travelling in his car, then he reaches the sets of his movie Fan and introduces his team members.

Just another day at work.

The app has been designed to let the celebrities share a slice of their life, live with their fans. And Shahrukh does exactly that. At the end of the video, he even starts a song from his movie Dil Se, which sort of compliments the whole video, and delights his fan.

As per Vadim Lavrusik, Product Manager at Facebook, their new app will soon feature celebrities such as Dwayne The Rock Johnson, Serena Williams, Luke Bryan, Ricardo Kaka, Ashley Tisdale, Lester Holt, Martha Stewart, Michael Bublé and more. Vadim said, “You can comment on, like or share the video while watching a live broadcast. You can also see when your friends or other public figures start watching.”

You can find more details about Facebook Mentions here; and some FAQs regarding it’s usage here.