“Where the mind is without fear and the head is held high ; Where knowledge is free

Where the world has not been broken up into fragments; By narrow domestic walls …

Into that heaven of freedom, my Father, let my country awake”

When PM Modi talks about Digital India, and shares his vision about a complete digitalized country, what exactly does he mean? When a budget of Rs 1 Lakh crore is being allocated for implementing Digital India vision in every state, district and village, what precisely has the policy makers of India thought about?

It is much more than just faster Internet connection and availability of WiFi in the city; the true meaning of Digital India is empowerment of citizens, and making their lives better using technology. The penetration of technology into day to day operations of a typical rural family, providing access to Government schemes and programs to the weakest section of the society using Internet and technology, is actually Digital India.

Akodara, a tiny village with 200 households, which is situated 90 kms from Ahmedabad in Sabarkantha district, provides us with a glimpse of what exactly Digital India is all about.

In January, 2015, PM Modi dedicated India’s first Digital Village to the nation and during the next 7 months, ICICI Bank, along with active participation from local administration and Gujarat Government has completely recreated the rural setup, and induced a new wave of empowerment and development using technology as the backbone.

This whole campaign of implementing Digital India in a small rural village is set on three Cs: Cashless, Connected and Comprehensive.

We visited this village last week, and experienced the transformation first hand:

In Akodara, villagers have stopped using cash; even purchase of grocery items are paid via mobile banking. Not only entire village have been included into the banking net, but everyone in the village is empowered to use mobile banking for every need. At a grocery shop, all they need to do is send an SMS to make the payment. (infact, Akodara had no bank earlier)

Not only shopping, but cashless facility via mobile banking is being used for their agricultural transactions as well. For example, when a farmer visits the local co-operative society for selling milk, the funds are automatically transferred to his bank account. Villagers informed us that earlier, when the co-operative society provided them cash, it used to get spent immediately. But with cashless transactions, they are able to save more money.

A direct result of being Digital. 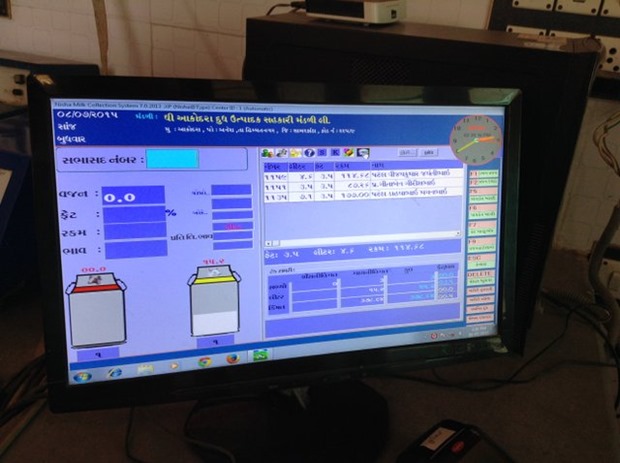 ICICI Bank has installed a WiFi tower, right in the middle of the village, which provides high speed Internet to the whole village, round the clock. This has enabled youngsters and elders to seamlessly shop on leading ecommerce portals, and order their favorite goods online. (on a side-note, Snapdeal is more popular among youngsters, compared with Amazon and Flipkart. Shoes, Clothes and Electronic gadgets are the most sought after goods, online)

Besides, a huge digital display has been installed which provides the current, live prices of agricultural commodities which helps the farmers to make important strategic decisions. A large digital clock reminds every visitor about the change which this village is experiencing.

ICICI Bank has made sure that every aspect of a villager’s life is touched and enhanced using Digital and Technology. Hence, if we talk about education, health, jobs, skills development, and general infrastructure, then we will find that each of these areas are actually covered and transformed using technology.

The impact has been especially magnificent in the education niche: If a student at the local school bunks a class, his parents immediately receive an SMS about the attendance! Attendance procedures are bio-metric, and updated at run-time. Every classroom is equipped with a high end apparatus which is a combination of projector and computers; which villagers lovingly call as Knowledge-Yaan (Vehicle of Knowledge). When you actually see the excitement in the eyes of students while they watch the working of a nanotube and practical implementation of Newton’s law, live on the screen with explanation in their native language, then you realize the power which technology brings in.

In Anganvadi, children are provided with tablets, and every classroom is covered with CCTV, so that their parents can view them live, right on their mobile. When we enquired with teachers, regarding the impact of such digitalization drive, then they informed us that interest level among students have increased by several notches, ever since their ‘knowledge-yaan’ has arrived. As per them, earlier (and in most of the villages and cities), a student only reads about a theory but with digitalization drive, he can see it, experience it live. This enhances his imagination and grasping power.

The courses are not only updated regularly, but they are also available in the local LAN, so that other teachers can also access them in different classes.

And as the whole village is powered with high speed Internet, it is not uncommon for students to quickly open Google and find the solution of that complex mathematical equation. Infact, that’s a normal activity there. eVaidya, which is a novel health initiative powered by technology is another big step in improving their lives. There, a patient’s basic health indicators such as blood pressure, temperature, weight, height are recorded, and saved in an online health management system. This complete health data is accessed by doctors sitting 100 kms away in Ahmedabad, and the patient is diagnosed using live video conference.

Further, as the data is saved in the system, it is easier to keep track of health and to provide medicines immediately.

Akodara shows us the immense possibilities which exist within the realm of a true Digital India.

As per the villagers, it took just couple of months for everyone to get accustomed and trained on these new systems, and now, it has become their habit. Not only their time and resources are saved, but they are also able to save more money, increase their productivity and make their lives easier and better.

The spark of a new rural India, which ICICI Bank & Gujarat Govt. has successfully showcased in Akodara, sets an example for social organizations and other State Governments.

If we are able to replicate the same model across every village in India, then, there can be a social revolution of unprecedented scale. This is just the beginning.