Interestingly, April and May has been months of much slower growth. For comparison, March 2015 had seen addition of 9.31 mln whereas and Feb had seen 8.24 mln new mobile subscriber additions.

The fall in the numbers have primarily come about due to the fact that Reliance (1.1 mln) and Tata (0.93 mln) lost subscribers heavily. On the Idea cellular once again topped the charts with higher number of new mobile subscriber additions.

Here is how mobile subscribers have grown in India over past 1.5 years. 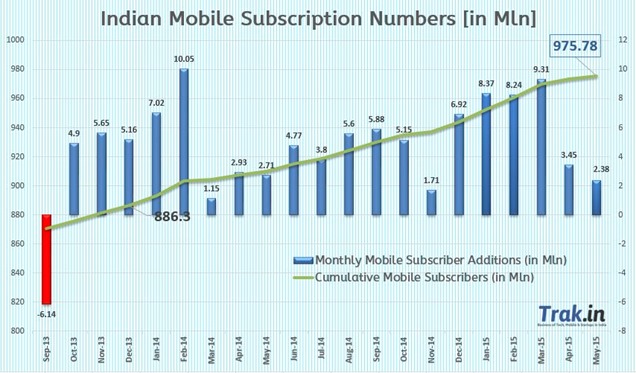 Here is how active subscriber base has grown over past 18 months. – Urban India witnessed a monthly subscription increase of 0.01% percent or 0.05 mln subscribers, while rural mobile subscriber base increased slightly by 0.57 percent or 2.38 mln. – 3.24 million new Mobile portability requests were made in month of May 2015, taking the total tally of MNP requests since launch to 160.25 mln. Idea Cellular’s stellar performance over past 12-15 months can be gauged from the fact that they have added 22 million subscribers, which Airtel has added shade below 21 mln. Vodafone added 3rd highest with 16.7 mln. Aircel and Uninor have also done well with both of them adding over 10.5 mln.

The worst performer by far has been BSNL who have lost a whopping 13.9 mln subscribers. Reliance, Tata and Sistema were the other who also witnessed negative growth