Truecaller, which claims to be world’s largest community of mobile phone users with 150 million+ users globally, has launched a new messenger app called Truemessenger, which aims to replace your native SMS app on Android phones.

Powered with high end spam detection tools, the main purpose and objective of Truemessenger is to identify unwanted numbers inside your SMS inbox, and help you categorize that information so that you are aware and informed about each SMS which comes in.

Using a very simple interface, the user can quickly mark a number as spam, and move it to the spam folder so that it doesn’t bother you with unwanted SMSes in future.

Using Truecaller’s robust database of 150 million users globally, Truemessenger will assign a name and other details for every incoming message. After Truedialer, which Truecaller launched few months back, Truemessenger is their 2nd biggest launch in less than a week.

After Truemessenger is installed, it will ask you to set it as a native SMS app for your Android phone. Once done, Truemessenger will ask you to enter your name and number, and seek permission regarding your visibility on their network: It can be either public, your friends of friends, or only on request. (This step helps in protecting your privacy, but is it enough?) After that, the app will automatically create a default spam filter, and categorize every existing message based on that. For every new incoming message, this app will let you know about the person behind it, by extracting the relevant data from their Truecaller database. In case you wish to mark a number as spam, all you need to do is tap on it, and categorize as spam. You can block the number/series and name as well. 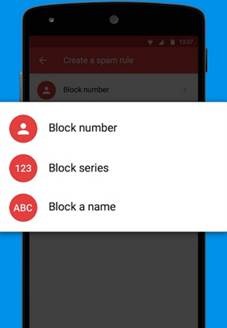 Once you receive an SMS from a number which was previously marked as spam, then the app will also let you know how many people have actually marked that number as spam. (Very useful feature indeed, as it gives an idea about the level of spam. But at the same time, it can also be misleading if a group of Truecaller users decides to deliberately mark a particular number as spam.)

For example, I have a dual SIM phone, and I use Sim 2 as a default one for sending SMS and making calls. In my case, Sim 1 is a prepaid one (with no balance) and Sim 2 is a postpaid one.

Considering Truemessenger is my native SMS app now, I opened it to send a SMS to my friend. But the app failed to send the SMS as it was picking Sim 1 as default Sim, and there was no balance left there. I tried searching for an option to convert Sim 2 as default, but there was no such option.

I had to actually remove the app to send that important text message from my native app.

Another bug I encountered was during incoming call from a friend who uses Truecaller app. I am not sure what exactly happened, but the phone was stuck in a deadlock when that friend sent me an SMS and then immediately called me. Both Truecaller (which was previously installed) and Truemessenger started identifying the number simultaneously, and the phone stopped functioning.

It can be a handset related issue as well, but as I discussed with some other tech enthusiasts, having a separate app, just for messages, seems like overwhelming for some.

One design related issue which I encountered while using the app, was the close resemblance with Facebook Messenger app, when it comes to visibility inside your phone. Both are named the same, and hence will appear next to each other. Can It Replace Native SMS App?

I believe there are two possible reasons, which makes it tough for an Indian user to make Truemessenger as a default SMS app:

a) The term ‘Messenger’ has evolved drastically over the last 3-4 years, and a typical user expects much more than a plain text messages from an application which is named as ‘Messenger’ . With their voice calling feature, WhatsApp and Viber has already staked their claim to be the top preference for a category named ‘Messenger’, and it would be tough to psychologically convince a user to dedicate his time and resources on an app which only enables SMS functionality.

b) As per a Nielson survey conducted in 2013, it was found that in 2010, Indians used to send 9 SMS / day, but by 2013, it has dropped to 2 SMS/day. Indian Telecom companies have lost 90% of their SMS revenues, due to low numbers. When WhatsApp claims to be have 70 million users in India, and Viber claims around 40 million users, with more and more people spending more time on them (average of 30 minutes a day), it seems that Truecaller is overestimating their reach of Truemessenger. Although 80 million Indians use Truecaller (which is the reason they launched Truemessenger only in India), it can be tough to convince users to have a separate SMS app to filter our spam messages.

There are also concerns regarding OTP messages from banks, which can be categorized as spam by Truemessenger, which can obstruct the payment process of the user.  [Editors Note: Infact, most transactional messages are marked as spam. So, you get a package delivery notification from E-Commerce site, it will be marked as spam.]

Identification of spam messages is certainly an important and crucial requirement for the user, but having an entire app, which consumes resources and makes the experience overwhelming can be a thing of concern for Truecaller team.

You can download the app here. Some of the users of Truecaller I talked with, said that that they could have simply integrated the features of Truemessenger (and in some case Truedialer) into Truecaller, instead of creating a separate app.

None of the less, the app has received some good reviews at Google Playstore, where 707 reviewers have given it a rating of 4.3/5 as of now. Spam is definitely one of the biggest problems which mobile phone users face, and Truecaller has done a fascinating job in helping us identifying them. Now, it’s the turn of Truemessenger for doing the same for SMSes.

In case you are using Truemessenger, then do share your experience by commenting right here.