Laxminarayan Krishnamurthy, who used to work in Central Bank and is now living in Mumbai had ordered a Samsung Galaxy smartphone on Snapdeal.com. When the delivery finally came, he received Vim Bar in the package. This outraged him, and he shared his woes on Facebook.

That post quickly escalated, as more than 20,000 people shared his post of Snapdeal package filled with Vim Bars. 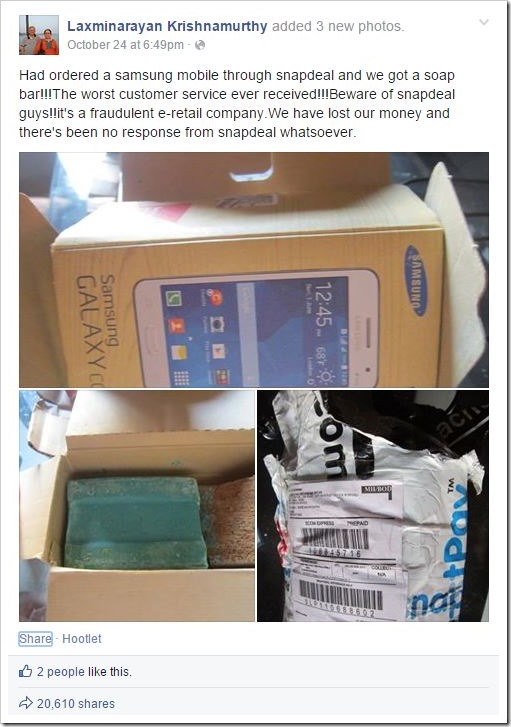 Snapdeal, which has recently received billions of dollars of investment and is riding high on it’s success, of course took notice of this debacle. But took some time, and after 6 days of that post, Laxminarayan posted that Snapdeal has refunded full money and apologized for the same. As per the post, it seems that the fault was from the courier and delivery personals.

Customer Service department and Media in charge of Snapdeal did an average job here; they followed the rule book, and did accordingly.

But was the core issue resolved here? Did the customer get his mobile or he ordered it again?

HUL Does The Unthinkable

We forgot to take into account what actually came into that package: Vim Bar.

Considering that 20,000 people had shared the post, covered by several mainstream media outlets as well, the company behind Vim Bar: HUL (Hindustan Unilever Limited) took notice of the whole chaos. And what they did next can be termed as exceptional customer care service, which doesn’t just delight the customer but also forced him to say wow.

HUL send Laxminarayan the exact mobile which he had initially ordered via Snapdeal: Samsung Galaxy Core Duo, along with a letter:

“The pictures you posted online show that our brand was used in this incident. Vim is one of our iconic brands with some great consumer franchise. We felt bad about it, not to mention what you went through. Here is a small gesture from our side to cheer you up.” Yes, he had added the emotion: ‘Feeling Excited’.

This excitement, also translated to wow factor is the need of the hour.

If Snapdeal had displayed some creativity, some out of the box thinking while resolving this issue, then we would have been praising Snapdeal instead of HUL.

Moreover, selling mobile phones is not HUL’s domain, they are a FMCG company, but as Vim Bar was the bone of contention in this whole debacle, they took it heads on, and delivered a punch.

Brands, especially from the booming ecommerce market in India, needs to pick few essential lessons from the outstanding and stellar customer service example shown by HUL.

Having billions of dollars of venture fund and millions of page views doesn’t cut the ice, unless you are able to bring a smile on the customers face.