In the latest study on the ‘State of Ecommerce’ in India conducted by ASSOCHAM and Comcast has unearthed several interesting aspects of Internet usage in the country, and the penetration of retail shopping using digital medium. 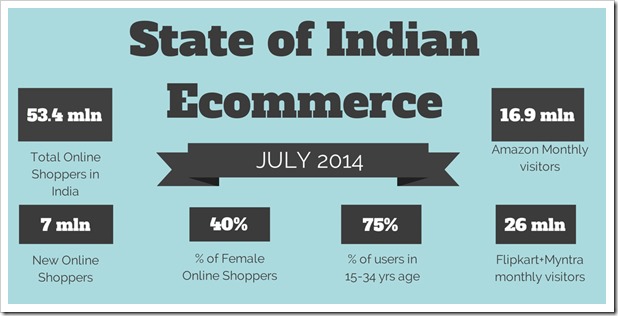 – Overall, eCommerce in India has been able to reach 53.4 million Internet users, which means penetration of 65%. This number is growing at a rate of 15% per year

Travel niche in India is growing at a rate of 3.4% per annum, compared to 15.3% of ecommerce niche

– Apparel niche is growing at a rate of 66% per year, whereas fragrances and cosmetics grew at 12%; Health and Home Furnishing are sectors which are growing excellently.

– Among all BRIC countries, India has the third largest user base of Internet retail shoppers

– Russia is growing at a rate of 32% per year, as it has added 13 million new eCommerce shoppers

– Brazil has added 6 million new users of ecommerce last year, as its growing at a pace of 13% per year

– Globally, Travel niche has shown maximum growth among all industries online; Last year, 660 million Internet users from all over the world visited travel websites and this number is growing at a rate of 8.7% annually (global scale)

The report provides a glimpse of the unprecedented growth which Indian eCommerce industry is currently witnessing, which is fueled by billion dollar revenues of Flipkart and billions of dollars of investment promise by Amazon along with several more investments and ventures in this space.

Jabong, Snapdeal and eBay are closely following the industry leaders, and collectively, this is an amazing time to be in the industry. Do share your opinions and insights based on the findings of this latest report by commenting right here!