As per the latest sales figure of Personal Computers (PC) in India for the first quarter of 2014 released by IDC, Dell has beaten HP to become #1 PC seller.

For the period between January-March, 2014, total of 2.01 million PCs were shipped all across India, out of which Dell achieved 23.1% market share, becoming the top vendor of PC shipments. In fact, they have improved tremendously in commercial PC sales with improvement of more than 40% compared to last year.

In 2013, it was HP which was the top seller of PCs inside India, but for the first quarter, it only managed to capture 20.4% market share.

With 14.9% market share, Lenovo was at #3 position. Acer was at #4 position with 10.9%. Interestingly, with 30.7%, non-branded PC companies garnered maximum share in the overall PC industry in India. 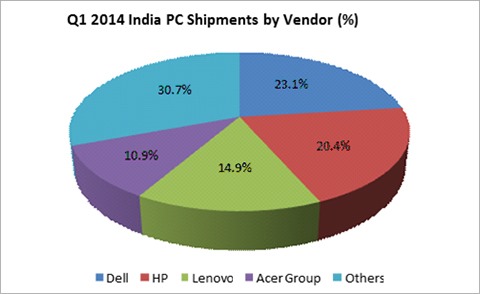 Overall, PC sales in India for the first quarter of 2014 dropped more than 25% compared to the sales figure of the same period last year.

There are basically four types of PC sales in India, out of which only Commercial desktop sales recorded positive growth rate compared to last year. Consumer desktop sales were almost equal meanwhile Commercial notebook and consumer notebook both had negative growth.

In the first quarter of 2014, a total of 1.02 million Commercial Desktops were sold in India, which is an increase of 4.1% compared to last year. Kiran Kumar, Research Manager of Client Devices at IDC India said, “The overall Commercial PC market showed first signs of improvement over the last 9-10 months as investment activities have improved in the Banking and Government verticals. Vendors are optimistic about the overall market sentiments and believe it will pick up gradually among other verticals too in the course of 2014,”

Why Dell Was Able to Beat HP This Quarter?

IDC shared several crucial reasons which enabled Dell to beat HP and become the top PC seller in India for the very first time. Some of these factors include:

Analysts are predicting that PC sales in 2014 will increase considering that a new government is taking over, which has promised a fresh perspective into IT education and expansion of Internet in rural areas. It would be really interesting to observe how PC sellers change their strategies for the next coming months.