Social media enables brands to carry out really personal and one-to-one conversations with their consumers, and that’s what makes it the in-thing. People you have always wanted to reach out to, your customers, with the advent of this media are just a call way.

But, such awesome opportunities bring along lot of trouble as well, if not handled well. With the power being in the hands of the customers, a mistake happening over social media can’t that easily be undone. Result is a tarnished brand image and damage that is beyond repair.

Here we are with 5 such goof-ups that hurt the concerned brands hard, in the year that’s about to pass:

Volkswagen India came up with a really innovative advertising stint, called “vibrated” wherein they placed vibration-inducing chips, as a metaphor for excitement that driving brings along. The campaign got lot of eyeballs, and gradually people began commenting & tweeting it out on social media platforms. What seemed to be going quite okay for the Brand’s popularity, turned havoc with a response from the brand to one of the tweets.

Things turned ugly, when after receiving not the kind of attention they wanted, the agency/hand chose to delete the tweet. And, then came the famous tweet, which has been touted as the panacea for all such disasters.

Our Volkswagen twitter handle got compromised. We officially distance ourselves from it. We are investigating this issue.

The phrase “Mamma Mia” means my mother. Mamma Mia is also the twitter handle of an initiative by Fortis Healthcare. And their bio reads:

The brand was out to celebrate World Breast Feeding Week this August, but they really missed the point and chose a rather outrageous hash tag to do it for them. They called their followers to use the following #AgarMaKaDudhPiaHaiTo and tweet.

And the CONTEST starts! Use #AgarMaKaDudhPiaHaiTo as the hash tag and post creative one liners!! :D

The brand did receive exciting posts, but none such that could meet the brand’s objectives, for obvious reasons. To add to the fun, people even associated the hash tag with people like Sunny Leone & Rakhi Sawant, and all of it in bad taste. Tweets came in like the ones given below…

Finally, they attempted to save it all, with the following post:

Now, this one cannot be called a classic Social Media goof-up, but the statements made on Twitter and Facebook were very damaging to a brand like Audi!

Vishal Gondal who is the Managing Director, DisneyUTV Digital and a powerful social media influencer at that, gave his Audi Q7 to an authorized Audi service station at Kalina. With the tech savvy that he is, his car had a GPS tracking system[6] installed, which recorded all of the car’s movements.

A notification stating that his car had exceeded the speed limit in the middle of the night, made him aware of the whole thing, on investigation of which he saw that somebody had been driving his car all this while on the roads of Mumbai. 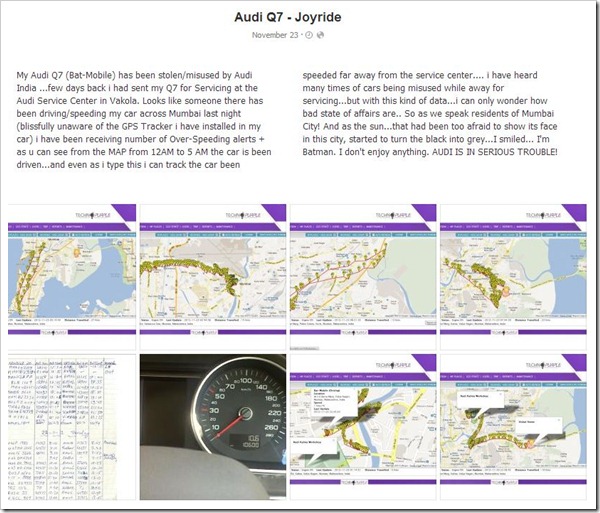 The news got shared like anything before you know it, to nobody’s surprise, and Audi had a crisis at hand. Audi India failed to respond on time, and a post by this social media influencer went viral. If Audi had intervened in timely manner, much of the damage caused could have easily been diverted.

What could have been easily sorted out on Facebook, blew out of proportions on twitter, owing to mishandling of @CoolChefCafe. Kenneth Lobo shared the above image was shared and thereafter, all hell broke loose, and all concerned fellows shared it too. Within no time, the image was everywhere from twitter to facebook.

And what happened after that is history: Clinton Jeff, a blogger from Delhi participated in a Samsung Mob!lers 2012 Program and went to IFA, Berlin as a part of the same. His trip was entirely sponsored by Samsung. Clinton opted to travel as an independent journalist and this where the fuss began. He was not just asked to adorn a Samsung-branded shirt but also promote the company’s products to fellow journalists. To this when he did not comply, his sponsorship was immediately withdrawn, he was left at the show unattended.. This got reported by news sites and blogs across the world, causing much damage to Samsung.

Nokia made the most of the moment and offered Clinton, to sponsor the rest of his trip. Thereafter, the, the micro-blogging site, Twitter was flooded with tweets carrying the hash tag, #ScumbagSamsung.

However, this one didn’t go too far for Samsung India issued a statement on this one and also apologized to the blogger.

Again, Samsung could have averted much damage if they had taken action in time and but by the time they did apologize, much harm was already caused.