The world is not only grappling with Economic Crisis, but an environment disaster as well. According to recent information released by UN based organization, year 2011 has been recorded as worst year for green house gases. If we go along with the forecast released, things are going to worsen further from here on.

The figures set a new record this year in terms of carbon dioxide emission. The report says carbon emission reached 10 billion tons in 2010 and that the average yearly fossil fuel emissions increased by an average of 3.1 percent starting 2000 up to 2010, and expected to continue to increase by 3.1 percent this year.

2011 has also witnessed extreme weather change & natural disasters. Earthquake at Japan & massive flood at Thailand simply demonstrate the effects of global warming. Although, the jury is out on linkages between temperature changes and Natural Disasters, following graph will give you an idea about the significant growth in natural disasters in recent years. 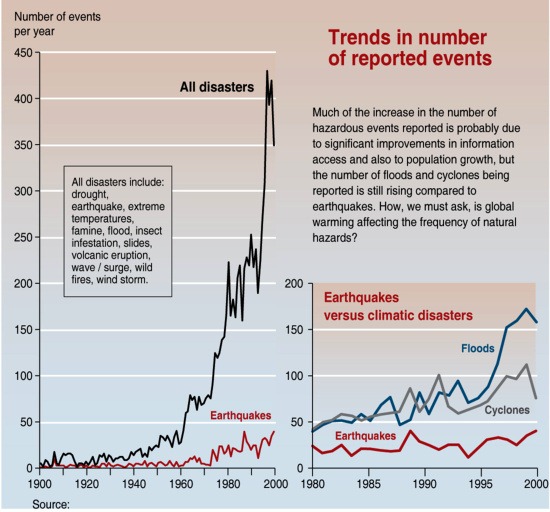 Earlier to this year, 2010 was termed as the hottest year in the history whereas 2011 likely to carry on the trend of being one of the warmest years of all time as well. Its irony that on one side we’re making plans to cut emissions but on the other side these figures are sky-rocketing.

The point to be noted here is – carbon emissions are more fuelled by developed countries. Even emerging economies like China are alone responsible for about 2.2 billion tons of fossil fuels emissions.

Unfortunately Durban summit ended with simply no result apart from any more commitments that could be taken in account. It’s quite interesting to understand what exactly these protocols are.

UN introduced a clean development mechanism called CDM which allows developed countries & industries to reduce emission at low cost by investing in the projects that cut greenhouse gases indirectly. Against this reform, countries earn credits called Certified Emission Reductions that comply mandatory to carbon reduction targets. This mechanism came into picture in year 1997 during Kyoto Protocol where countries mutually agreed on this parameter. In recent years, it was found that few countries are explicitly ignoring this past pact.

It is just because of more political influence than any technical matter that shouldn’t be on table. Kyoto, Copenhagen, Cancun failed… What’s next?

[This guest post has been written by Saurabh Mishra, a Petroleum Engineer & Gases Professional, who studies energy & environment markets across the globe.]