If there is any doubt about Symbian’s Indian connection, Statcounter’s numbers should dispel all of them. Symbian occupies a prominent position in India’s mobile OS world. With a near 72% share, Symbian has an unassailable lead.

Symbian is distantly followed by Samsung at 11.21%. This is Samsung OS and not Bada OS which is prominently placed at seventh position with a market share of 0.26%.

Statcounter tracks the web activity of all the phones that exist.

iOS is just behind Android with a market share of 0.72%. Not bad for an operating system which runs on premium phones only. Though it lost market share from the previous year. For all the hue and cry about Blackberry, it has occupied a 10th position with 0.17%. I bet most of them would be celebrities and business folks.

There is a unknown OS listed in the top 10. This OS doesn’t belong to any major manufacturer indicating the OS run on plethora of Chinese handsets available. And that is a significant chunk too. It occupies third position with 9.95% market share. It is unclear if this also includes Chinese made handsets marketed by Indian manufacturers like Karbonn, Spice and Micromax. 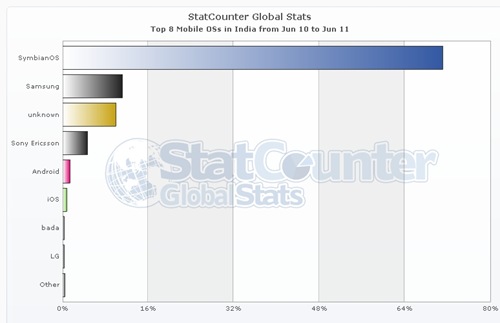 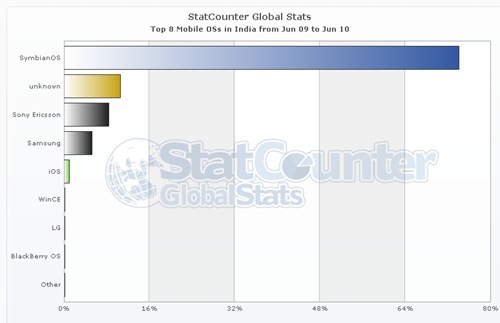 Symbian has lost 3 percentage points in its market share. Samsung has gained smartly from its 5.28% market share. iOS’s market share has come down and I am not sure what explains this drop. Samsung and Android are the only two OS’s which have gained from the previous year.

Globally too, Symbian still occupies a number one position with 32% market share, though it isn’t dominant. iOS, Blackberry and Android are the other 3 operating systems which are closely following Symbian. 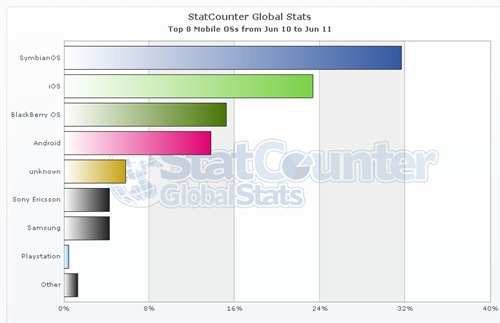 One thing to note in these stats is, these stats are cumulative figures covering the period of Jun, 2010 to June 2011. Unlike the Gartner reports and predictions, this report doesn’t track the shipments made in a particular quarter. StatCounter covers the number of available phones in the country during a period of one year. A one year study of the existing phones and their OS is an accurate measure to know the operating system share. Not the last quarter shipments like we typically do.

[This post has been reproduced from The Gadget Fan for benefit of Trak.in readers]