This had to happen – Otherwise how is India going to accommodate more than 10 million mobile subscribers every month. In all probability we have already crossed 500 million Telephone subscriber mark, majority of them being Wireless subscribers. 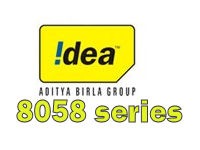 Similarly, Idea Mobile users in Rajasthan, Maharashtra and Goa will be amongst the few in the country to get the new series of mobile numbers starting with ‘8’. Like Reliance, ‘8’ number series is available for new connections in both pre paid and post paid category. New 10 digit IDEA numbers in Rajasthan will be of “8058” series.

Interestingly, for Maharashtra and Goa, Idea has launched the series “8055” and marketing it as “BOSS” series..pretty interesting eh :)

In 2008, there was a news that very soon we would be having 11 digit telephone numbers – I dont know where are we on that front?

India set to waste time worth $ 795 Million reading spam SMSes in the next one year.